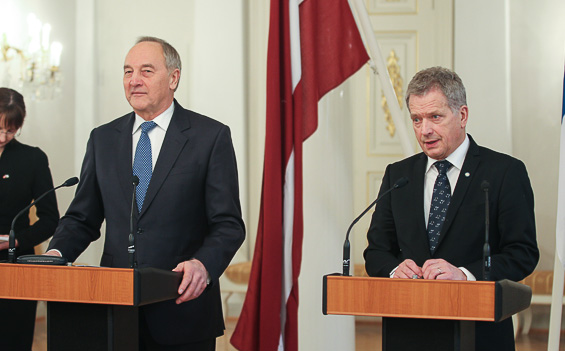 The ever closer relations between Finland and Latvia and security policy issues, particularly the situation in Ukraine, were to the fore in discussions between President of the Republic Sauli Niinistö and President of Latvia Andris Bērziņš on Wednesday 28 January. President Bērziņš is in Finland on a two-day state visit, which began with an official reception ceremony and discussions in the Presidential Palace.

“Developments in Ukraine and the resulting situation in Europe were highlighted, with tensions also present in the Baltic region,” commented President Niinistö at a post-discussion press conference. The Presidents also responded to a question on the imposition of new EU sanctions on Russia. President Niinistö pointed out that now is the time to follow events in Ukraine very closely; if the situation has clearly changed since the autumn, then new sanctions will be required.

In the discussions, President Niinistö raised the issue of the threats and problems associated with hybrid warfare and the common need to build mechanisms to deal with such threats.

Latvia is the holder of the EU Presidency for the first half of 2015. Accordingly, the Presidents discussed the focus areas of the programme of Latvia’s Presidency, which are competitiveness, growth, employment and the digital markets. President Niinistö remarked that a Finnish programme would look very similar: “We have the same priorities and similar perspectives on them.”

Economy, education and research to the fore

The Latvian President is accompanied by five ministers and a large business delegation. “Such an exceptionally broad-based delegation tells us one thing: that our already close cooperation is intensifying,” stated President Niinistö. Issues to be discussed during the visit include the development of business relations; cooperation on energy; infrastructure; and collaboration on education and science.

On Wednesday afternoon, President Bērziņš visited Parliament, with Speaker Eero Heinäluoma acting as his host. He also laid a wreath at the Hietaniemi Cemetery, toured Aalto University and attended a seminar on Finnish-Latvian economic relations.

On Thursday, the second day of his visit, President Bērziņš meets with Prime Minister Alexander Stubb. During the visit, President Bērziņš will be given an extensive introduction to Finnish education, research and technology: on Thursday morning a discussion will be arranged on Finnish-Latvian collaboration on education and, in addition to Aalto University, the party visits VTT Technical Research Centre of Finland and the Geological Survey of Finland.

The visit concludes with a concert organised by the Embassy of Latvia in the famous Rock church (Temppeliaukion kirkko) as part of the cultural programme of the Latvian Presidency of the Council of the European Union.

President Niinistö made a state visit to Latvia in September 2013.