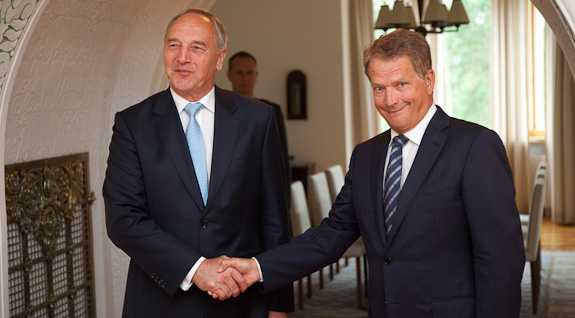 President Berzins and President Niinistö at a joint press ocnference at Kultaranta on 23 July 2012. Copyright © Office of the President of the Republic of Finland

Andris Bērziņš, President of Latvia, was in Finland on a working visit on Monday 23 July. President of the Republic Sauli Niinistö received President Bērziņš at Kultaranta, where they engaged in official talks.

Items on the agenda included bilateral issues, co-operation in the Baltic Sea region and the Eastern partnership of the EU.

The economic situation in Europe was also of interest. Regional issues discussed included the Rail Baltica railway line project and energy solutions around the Baltic Sea.

The Baltic Sea theme continued beyond the official talks, as the two Presidents boarded the yacht Kultaranta VIII for the short trip from Naantali to Turku to visit the Forum Marinum Maritime Centre for an introduction to the actions concerning the Baltic Sea undertaken in Turku. At the Forum Marinum, President Bērziņš posted a plaque highlighting the environmental values of the Baltic Sea on Saaristomeriaukio square.