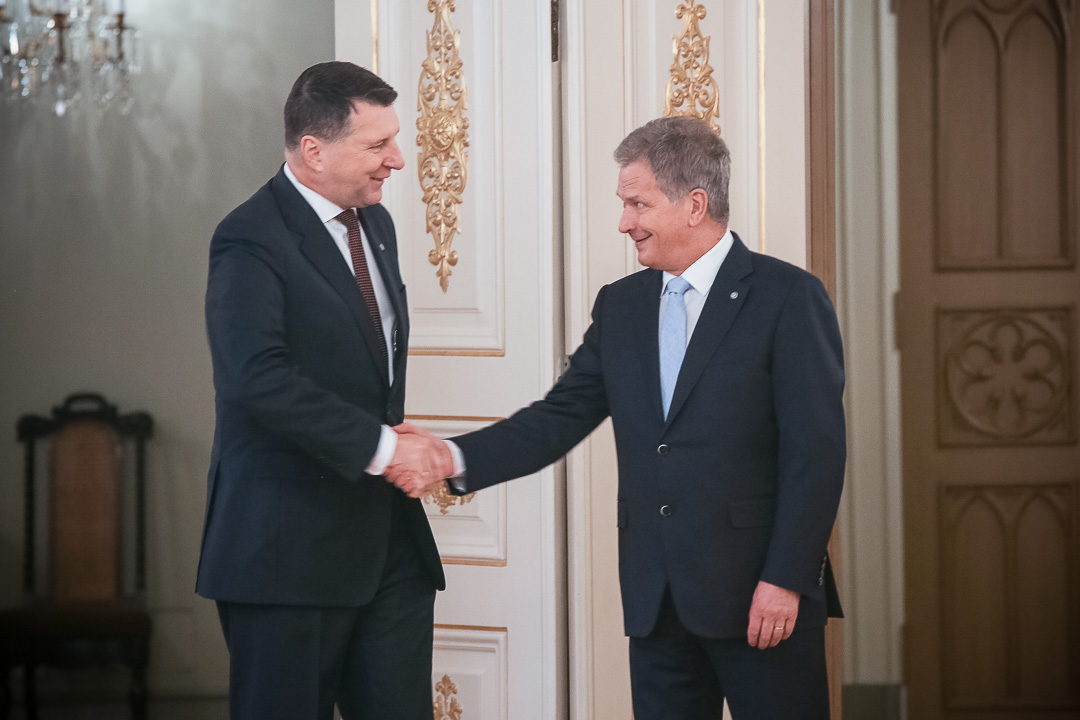 “You are the third Baltic president to visit Finland in a month. Maybe this reflects the very keen connection between the Nordic and Baltic states, and also bilaterally between Finland and Latvia. Our cooperation is very fruitful and it is extremely important during times like this,” said President of the Republic Sauli Niinistö after meeting with Raimonds Vējonis, the President of Latvia, on 1 November.

Baltic Sea security must be guaranteed

President Niinistö raised the security of the Baltic Sea region as the most important subject of discussion.

“Tensions have increased in the Baltic Sea region.  We have seen, just now, NATO bringing troops to Baltic countries. This is very important to stabilising the whole region, as well as guaranteeing the security of the people. We already guessed earlier on that Russia will react to this and now we are seeing the reactions,” said President Niinistö, referring to events such as Russia’s transfer of Iskander missiles to Kaliningrad.

“I believe that any action to reduce tensions or at least to stop them getting higher is very important to all countries around the Baltic Sea area. This is what Finland is working for,” President Niinistö emphasised. He also stressed the importance of dialogue with Russia and pointed out that dialogue was emphasised in the final communiqué issued on the NATO summit held in Warsaw last summer.

At the press conference, President Vējonis referred to Finland and Sweden’s participation in the Warsaw Summit.

“We fully encourage further strengthening of NATO cooperation with Finland and also with neighbour state Sweden. The summit in Warsaw was a really great event where Finland and Sweden participated as enhanced partners of NATO. I am sure that this cooperation will continue. Warsaw was just a starting point,” said President Vējonis.

The granting of dual citizenship should be revisited

Internal security within the two countries and the potential safety risk posed by dual citizenship were also raised at the press conference. President Niinistö said the issue needs to be discussed.

This was the third meeting between the presidents in a brief period.  Both also participated in the meeting of the Arraiolos Group in Bulgaria in September and the NATO Summit held in Poland in July. President Vējonis invited President Niinistö to visit Latvia as part of the countries’ 100-year anniversary celebrations. Finland will celebrate its centenary next year and Latvia will do so in 2018.