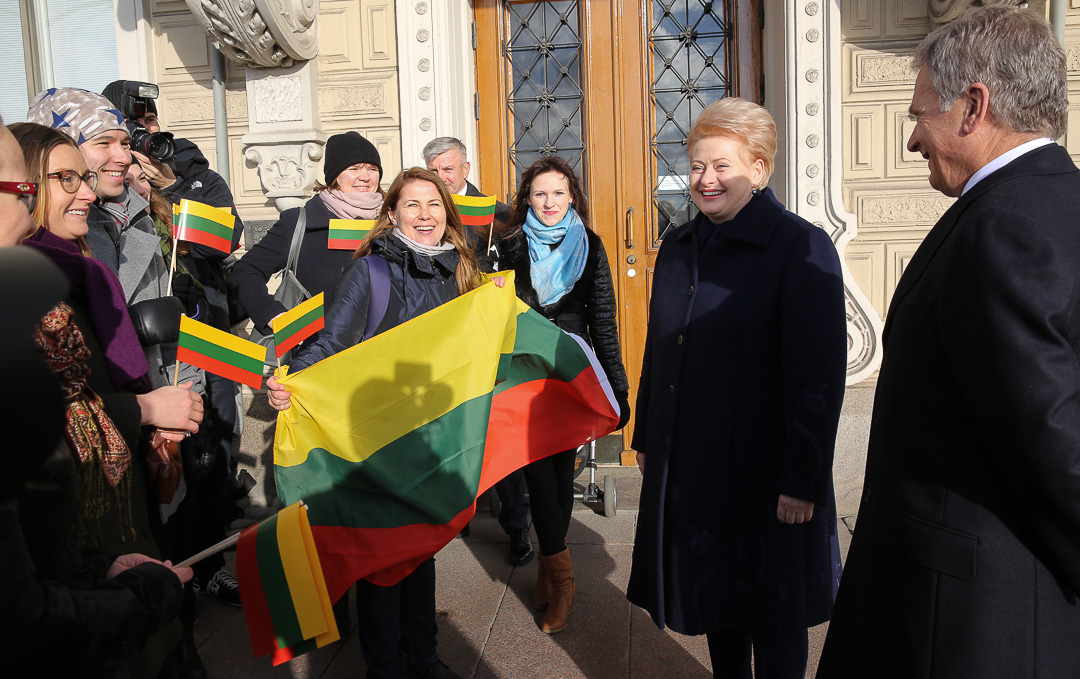 President of the Republic Sauli Niinistö received President of Lithuania Dalia Grybauskaitė in a ceremony held in the forecourt of the Presidential Palace on 18 October 2016. President Grybauskaitė was on a two-day official visit to Finland.

After the ceremonies, the presidents held mutual discussions, followed by discussions with a broader circle of participants including Foreign Minister of Lithuania Linas Linkevičius. The discussions focused on Finnish and Lithuanian relations and topical international issues such as the security situation in the Baltic Sea area, Russia, and the Syrian crisis.

Security in the Baltic Sea area must be guaranteed

In the press conference following the discussions, President Niinistö commented that Finland is promoting security in the Baltic Sea area by every means available: ”Nato is bringing more its troops to the Baltic countries and Poland. That is very much welcomed and needed. We have seen also how Russians react to this by having followed the transportation of Iskander missiles. Nevertheless, eventhough the situation has not gone to any better, Finland is still very active in increasing  the stability in the Baltic Sea area in every possible way. That is very important for all of us”, said President Niinistö.

President Grybauskaitė said that relations between Finland and Lithuania have become increasingly important in recent years, particularly due to the changed security situation.

”We need to increase cooperation in security matters, especially when we are talking about nonconventional elements of our security, such as hybrid attacks, cyber, propaganda or exchange of intelligence information. All these areas are our possibilities to be closer and to have more security in our region”, President Grybauskaite pointed out.

President Niinistö also raised the issue of the bombing of Aleppo in Syria, the fighting around Mosul in Iraq and the situation in Ukraine.

”Russian bombardiers have the major responsibility of that also civilians are being killed in Aleppo. In Mosul, we will see a strong fight to release the city from Isis, and it is most important that we don’t face the same situation where civilians are being hurt.  We also discussed about Ukrainian crisis. I’m sure we fully agree that the European Union and the international community must keep on sanctions if the Minsk Agreement is not met”, emphasised President Niinistö.

Economic cooperation between Finland and Lithuania was also discussed.

”The Finnish companies have been very interested in investing in Lithuania. And I’m sure that we will see very successful economic and financial operations also in the future. In addition, we welcome Lithuanian interest towards Finland”, said President Niinistö.

President Grybauskaitė referred to investments in energy and heating systems as a particularly good example of such cooperation.

”Cooperation on innovations and new technology is important because Lithuania is becoming the hub of start-ups. Your experience in reforming the higher education system is of utmost important for us. Finland is one of the most advanced countries from this point of view”, emphasised President Grybauskaitė.