Home / President of Myanmar on a visit to Finland 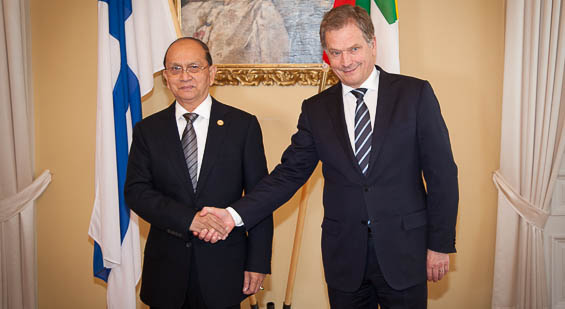 President of the Republic Sauli Niinistö met with the President of Myanmar Thein Sein on Friday, 1 March 2013 at the Government Banquet Hall in Helsinki. Among the most important topics discussed was recent progress in Myanmar. 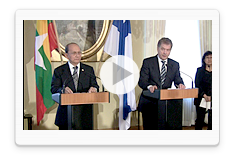 The presidents also discussed cooperation between Finland and Myanmar. Possibilities for closer cooperation exist especially in the spheres of reinforcing good governance and the rule of law as well as natural resources. Forestry and the mining industry, for example, also present opportunities for commercial cooperation. Finland is prepared to engage in bilateral development cooperation with Myanmar and plans to open a representation in Yangon.

In addition to private talks between the two presidents, President Thein Sein  met with President Martti Ahtisaari and Minister for International Development Heidi Hautala. He also visited Vuosaari Harbour and the Geological Survey of Finland.

President Thein Sein’s visit was the first presidential visit from Myanmar to Finland.