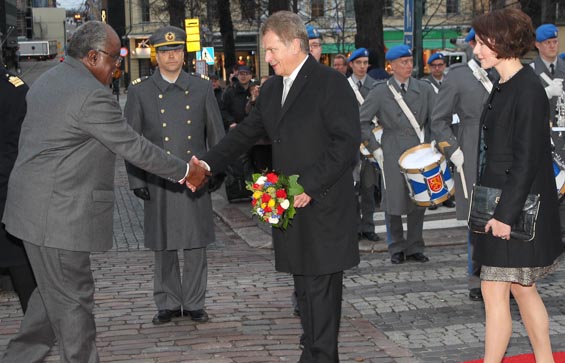 President of Namibia Hifikepunye Pohamba and his spouse were on a state visit in Finland during 11–13 November 2013. President of the Republic Sauli Niinistö and his spouse welcomed the guests with a reception at the Government Banquet Hall, Smolna, on Tuesday 12 November.

In the press conference held after bilateral talks, President Niinistö underscored the good, long-term relations between Finland and Namibia, which have their origins in Finnish missionary work in the 19th century. "Today, we have wide-ranging contacts in political, cultural, church, educational, scientific and business areas.”

Finland has decided to elevate its embassy in Windhoek to ambassadorial level. Finland will intensify its co-operation with Namibia also in other sectors, such as education and mining, President Niinistö said. “The mining industry in Namibia is most interesting for Finnish companies. This also tells that we have potential to increase and even diversify trade.”

President Niinistö stated that Namibia has attained great results in democracy and good governance. The drought situation in the country was also highlighted. In their discussions, the presidents had also addressed regional and global issues, and outlook for development.

In his own address, President Pohamba thanked Finland for its long-term support for Namibia and extended an invitation to the Finnish private sector in particular to come and invest in Namibia. “It is the business to benefit you, and to benefit us,” President Pohamba pointed out.

“Finland has done a lot for our country,” President Pohamba declared. “During the struggle [for independence], we sent young Namibians to come and study in Finland. Many of them have become [highly-educated experts] in different fields and these young people are now contributing to socio-economic development of [Namibia].” President Pohamba also introduced a member of his delegation, long-standing Minister Nickey Iyambon, who studied in Finland in the 1960s.

After the presidents’ talks, the programme for the visit included a lunch hosted by the City of Helsinki, a wreath-laying ceremony at the Hietaniemi Cemetery and a visit to Parliament. The day ended with a dinner hosted by the President and his spouse at the House of the Estates.

The final day of the visit included a visit to the Geological Survey of Finland and the Helsinki University Library. President Pohamba also met Prime Minister Jyrki Katainen, Namibian expatriates living in Finland and representatives of the Finnish-Namibian Society.