President Niinistö thanked outgoing Prime Minister Jyrki Katainen and his Government for the cooperation, and noted that its term of office was characterised by economic issues and the global financial crisis. ”Its impacts were impossible to avoid in Finland and in Europe. Quite rightly, your aim was to balance the national economy and to stimulate growth. Following Governments will need to set these same objectives.” 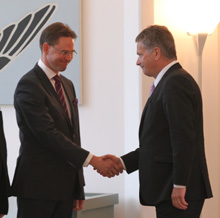 According to President Niinistö the plot, stage and set have constantly changed in EU politics. “Finland’s role, too, has changed: while still remaining faithful to the curriculum, the model student has been questioning the model.”

“Cooperation between the Government and the President has been smooth, also on the basis of the latest additions to the Constitution. However, we have perhaps had to share the experience of there being no need for further additions, at least not ones in the same direction. During the spring we witnessed how the importance of cooperation gains particular emphasis during crises, with the same issues being handled both within the EU and in other connections”, President Niinistö said.

President Niinistö gave a call to action to the new Prime Minister and his Government.  “The much-debated and repeatedly ‘decided’ structural reforms must now be settled and implemented for good. Demanding times lie ahead of you”. 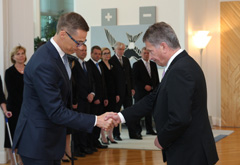 The new Prime Minister Alexander Stubb greeting the President. Photo: Office of the President of the Republic.

In his speech President Niinistö also touched on the Ukrainian crisis and Finland’s security policy. ”Finding solutions and providing support are now the most important priorities. At the same time, we must also assess what all of this means – and what it does not mean – for Finland. One conclusion is obvious. We must take care of our own defence capability.  This requires investment, perhaps greater than we have so far discussed.”

“There is another equally obvious conclusion to make: it is important to develop international cooperation on security policy and defence. This is our common duty. At the Kultaranta talks it was proposed that we assess the various sectors of our international security cooperation. This is an issue we can revisit at the meeting between the President of the Republic and the Cabinet Committee on Foreign and Security Policy.”

”A permanent vote of confidence”

President Niinistö concluded his speech with a note on the importance of confidence and courage.  ”Decision-makers are expected to secure the setting for everyday life. A permanent vote of confidence is needed on this. Decision-makers are also expected to leave room for creativity and to understand both success and failure. Encouragement is needed, even if this means encouragement to do things differently”, the President said. 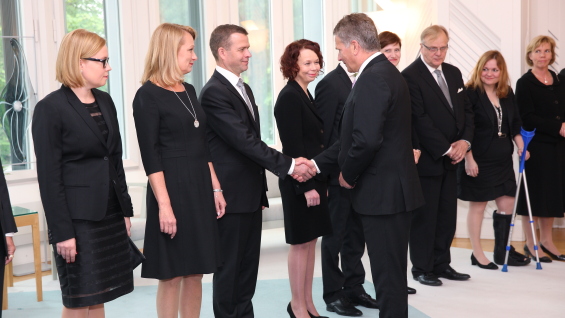 New members of the Government Laura Räty, Lenita Toivakka and Petteri Orpo greeting the President. Photo: Office of the President of the Republic.