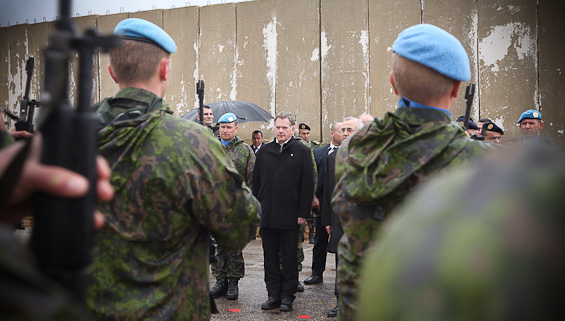 On Wednesday 12 March 2014, in the company of President of Lebanon Michel Sleiman, President of the Republic Sauli Niinistö inspected the Finnish crisis management force participating in the UN’s UNIFIL operation in South Lebanon.

Around 350 Finnish peacekeepers are serving in this operation.  Since last November, Finland has been in command of the Finnish-Irish battalion in the At Tiri area.
President Niinistö was introduced to the battalion’s operations, camp and observation posts along the border between Lebanon and Israel.

“The peacekeepers clearly take their assignment very seriously and are extremely committed. The situation is very delicate, and action is needed on a wide front to prevent further escalation. The peacekeepers’ work is highly sensitive,” President Niinistö pointed out.

Finland has participated in the UNIFIL operation on three occasions since 1982. Approximately 12,000 Finnish peacekeepers have served in Lebanon over a period of four decades. In the current operation, the UN peacekeeping forces monitor the border between Lebanon and Israel, support the Lebanese armed forces and offer assistance to the local population.

The Lebanese President, Michel Sleiman, welcomed President Niinistö in At Tiri and participated in the inspection of an honorary contingent of the battalion. During the inspection, the presidents engaged in a brief discussion.

The presidents will meet again in Beirut on Thursday, 13 March, for official bilateral talks. They will discuss issues such as Finnish-Lebanese relations and the regional effects of the Syrian crisis. In addition, the programme will include meetings with Mr Nabih Berri, Speaker of the Parliament of Lebanon, and Prime Minister Tammam Salam.

President Niinistö will return to Finland on the night preceding Friday 14 March.