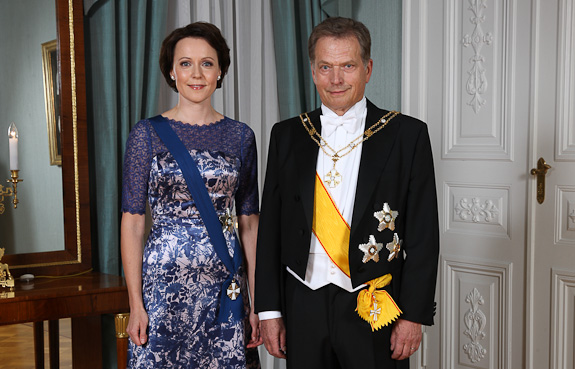 President of the Republic Sauli Niinistö and his spouse hosted their first Independence Day Reception at the Presidential Palace on Thursday 6 December 2012.

The theme for the Reception was ‘Finnish actions and work’. Following this theme, the guest list included people whose actions and work have contributed to the wellbeing of Finland and Finns. These actions span a wide range of activities; the guests included employees representing more than 50 occupational groups and entrepreneurs, from small entrepreneurs to major employers and from start-up companies to growth enterprises and farms. All are distinguished by their uncompromising efforts on behalf of a better Finland.

Major Finnish actions of the past were represented by war veterans and members of the Lotta women’s auxiliary, who figured more prominently on the guest list than in earlier years.

The guest list was further complemented by leading representatives of culture and sport, again with an emphasis on merits through actions and work.

As in previous years, invitations had been sent to all the members of the Government, Members of Parliament and Finnish Members of the European Parliament as well as senior civil servants and the diplomatic corps accredited to Finland. Other guests included Finns who have distinguished themselves in one way or another and people whom the President and his spouse met during the past year. Just under 1,800 guests in all were invited.

In keeping with this year’s theme, modern Finnish folk music was performed by the Saaga Ensemble in the Yellow Salon on the third floor of the Palace.