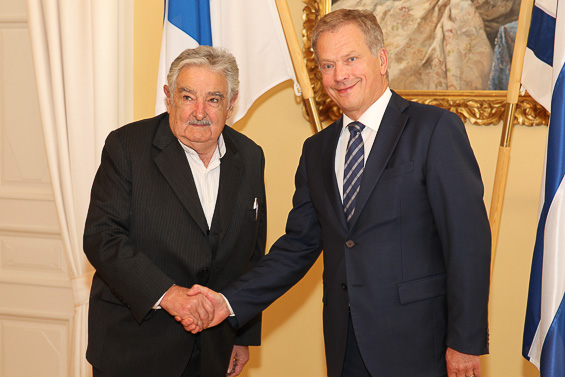 President of the Republic Sauli Niinistö met his fellow head of state, President José Mujica of Uruguay, in Helsinki on Wednesday 17 September. The visit was the first between the countries to involve a head of state. “There was a good reason for this historical event. Relations between our countries have developed very rapidly, particularly in forestry,” remarked President Niinistö at a press conference after the meeting.

Despite the fact that trade between Finland and Uruguay remained modest at the beginning of the millennium, Uruguay now ranks  seventh among the Latin American countries as a trading partner for Finland. President Niinistö thanked President Mujica for his support for Finnish pulp mill investments in Uruguay.  “These Finnish investments were already on the table when I was working at the European Investment Bank. I am glad to see that they bore fruit,” said President Niinistö.

President Niinistö pointed out that talks between the two countries had got off to an effortless start and had also covered major issues. “Two small countries get on well together and sometimes have insights on issues that are less visible to bigger players. Our discussions therefore also focused on the world’s future, how power relations are developing and about the latest events in South America and Europe,” stated President Niinistö, summing up the discussions.President Mujica pointed out that Finland was an important country to Uruguay, which could learn much from Finland’s success. He thanked Finland for its investments and expressed the wish that the technical and scientific cooperation between the countries would continue to expand.

President Mujica also reassured his listeners that there would be no change in Uruguay’s economic policy despite the forthcoming change of President, and that the investment-friendly approach of recent years would be maintained. “Our strong investment policy is one of the factors that has assisted our progress. We want to freely engage in cooperation with governments that wish to invest in our country,” said President Mujica.

In answer to the question of what he had learned from being president, President Mujica replied as follows: “Achieving the impossible takes a little more effort than other tasks. And we can never actually manage to reach the sky.”

President Mujica was on a three-day working visit to Finland, from 15–17 September 2014. Following the official meeting, the presidents continued their discussions over a working lunch. During his visit, President Mujica also met with Prime Minister Alexander Stubb and paid a visit to UPM’s Biofore House.

Video of the joint press conference