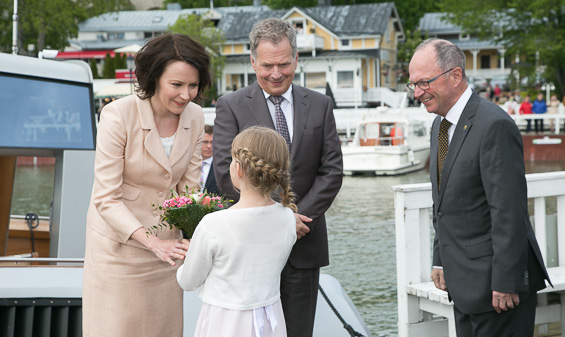 Caption: Kerttu Laaksonen, 8, presented a bouquet to Mrs Jenni Haukio. The presidential couple was welcomed by representatives of the Town of Naantali led by Mikko Rönnholm, Chairman of the Town Council (right). Copyright © Office of the President of the Republic of Finland

President of the Republic Sauli Niinistö and Mrs Jenni Haukio arrived at Kultaranta, the President’s summer residence, on Saturday 6 June.

There was a friendly atmosphere at the Naantali marina, with the presidential couple arriving at the Kilta jetty on board the yacht Kultaranta VIII. In a welcoming ceremony arranged by the Town of Naantali, Kerttu Laaksonen, an 8-year-old schoolgirl from the Karvetti School, presented a bouquet to Mrs Jenni Haukio. The presidential couple was welcomed by representatives of the town management, followed by a song by the Helianthus choir led by conductor Johanna Järvinen.

Earlier in the afternoon, the presidential couple attended a concert forming part of the Naantali Music Festival in Naantali church, featuring the Turku Philharmonic Orchestra conducted by Okko Kamu. The concert programme included such works as the French horn concerto by W. A. Mozart, Four Dream Songs by Aulis Sallinen, and the Karelia Suite and Finlandia by Sibelius.

The public will have the opportunity to admire the sculptures and the Kultaranta garden on guided tours organised by the Naantali Tourist Service. The Kultaranta garden will also be open to the public based on free admission on Fridays during the summer, from 6 to 8 p.m.

During the summer, the President of the Republic continues his work from Kultaranta as well as receiving guests there. The main event of the early summer is the debate on foreign and security policy, which has now been hosted three times by President Niinistö and will be held on 14–15 June.

Kultaranta, which is located on Naantali’s Luonnonmaa Island, has been the summer residence of the President of the Republic of Finland since 1922. Construction of the main building, a granite castle completed in 1916, was commissioned by industrialist Alfred Kordelin and designed by architect Lars Sonck. The Kultaranta residence lies in extensive parkland and has a garden devoted to the growing of flowers and vegetables.