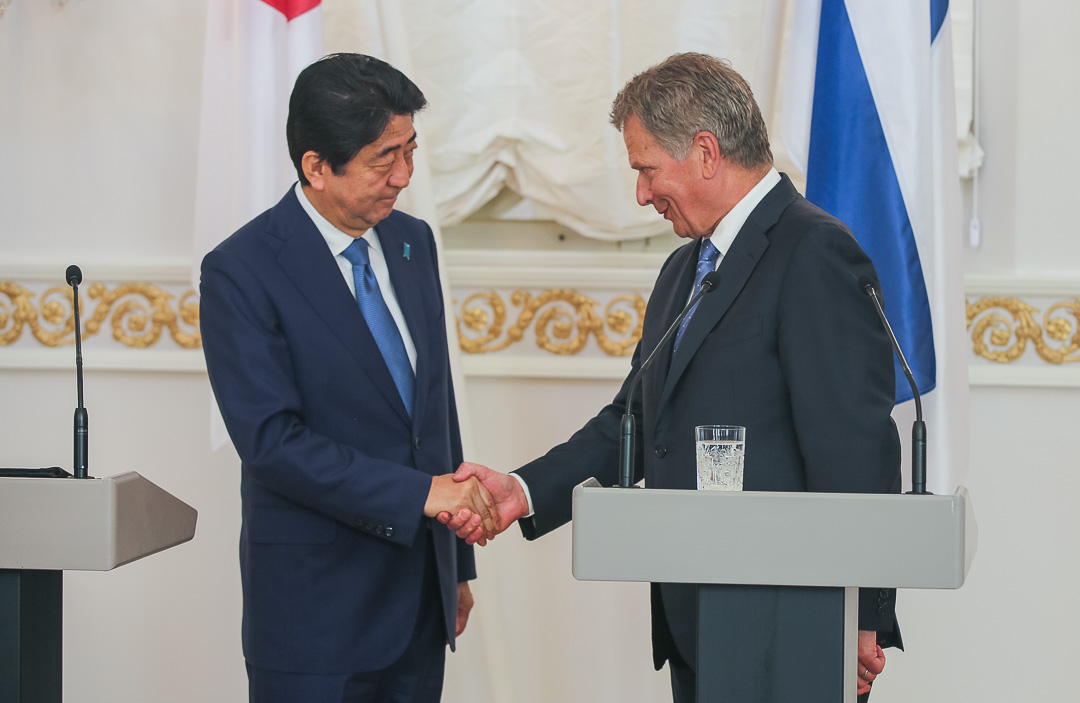 Shinzō Abe, Prime Minister of Japan, and President Sauli Niinistö shake hands at a press conference held in the Hall of Mirrors in the Presidential Palace. Photo: Juhani Kandell/Office of the President of the Republic of Finland

The Prime Minister of Japan, Shinzō Abe, has made an official visit to Finland with his spouse, Mrs Akie Abe. President of the Republic Sauli Niinistö and Mrs Jenni Haukio received their guests at the Presidential Palace on Monday 10 July 2017.

The resulting discussion focused on themes such as bilateral relations between Finland and Japan, Finland’s Chairmanship of the Arctic Council, and international issues such as the situation on the Korean peninsula. “We are greatly honoured by Prime Minister Abe’s visit during the centenary of Finland’s independence,” said President Niinistö at the beginning of a joint press conference.

President Niinistö referred to his official visit to Japan in 2016, observing that the fruitful discussions held then had continued. “We agreed on a strategic partnership a year ago, and the relationship between Finland and Japan has further strengthened. We face very similar challenges, such as an ageing population, sluggish economic growth and a changed security environment. On the other hand, we share the same strong value base, which we are both committed to promoting in the world.”

In their discussions, the President and Prime Minister noted that relations continue to strengthen between Japan and the European Union. President Niinistö viewed the free trade agreement concluded last week, at an EU-Japan summit in Brussels, as the latest example of this. “I told the Prime Minister that I expect the European Union to grow stronger from now on and understand that this is very welcome to Japan, which supports a strong EU.”

The Arctic Region and the ongoing Finnish Chairmanship of the Arctic Council were also discussed. “We are enhancing our cooperation in the Arctic environment in particular,” said Prime Minister Abe.

“For the first time, we may draw strong attention to the fact that economic interests and environmental needs must be carefully weighed up, to some extent as conflicting issues. I think that this situation will dominate Finland’s presidency, at least during the latter stages,” said the President, talking to the Finnish media after the visit.

“There is intense pressure to exploit the Arctic region. On the other hand, we know that climate change is progressing fastest in the Arctic Region, where it will have the most devastating consequences if it continues.”

Among other venues, Mrs Haukio and Mrs Abe visited the IPI Kulmakuppila café in Kallio, Helsinki, where the charity Lyhty ry runs weekday café workshops for disabled people and their instructors.

The visit marked Prime Minister Abe’s first trip to the Nordic countries during his premiership. He has visited Finland once before, in 1985 when he was personal assistant to his father, Foreign Minister Shintaro Abe. 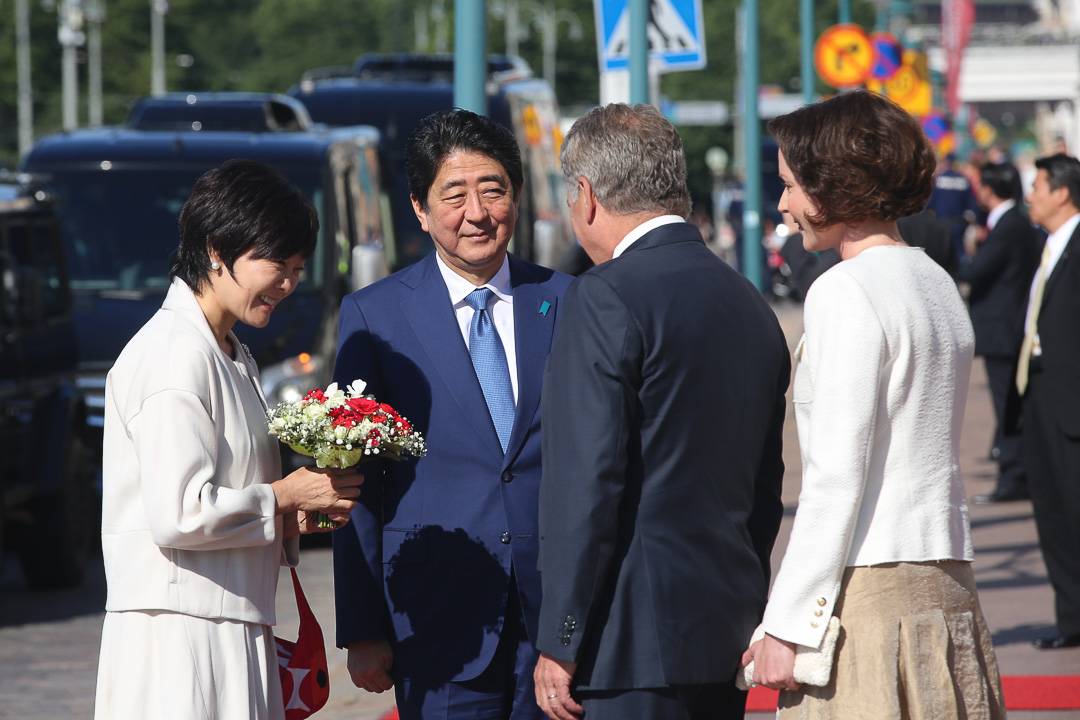 President Niinistö and Mrs Haukio received the Japanese Prime Minister Shinzō Abe and Mrs Akie Abe on an official visit. Photo: Juhani Kandell/Office of the President of the Republic of Finland