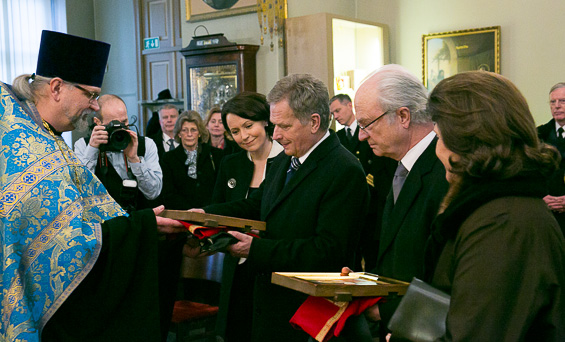 The presidential couple and the king and queen visited the local Orthodox church in Lappeenranta. Copyright © Office of the President of the Republic

The three-day visit by the King and Queen of Sweden ended in Lappeenranta on Thursday 5 March. The day began at Helsinki Railway Station, from where H.M. King Carl XVI Gustaf and H.M. Queen Silvia departed for Eastern Finland. During the ensuing train journey, the civic and provincial leaders of Lappeenranta briefed the royal couple on the region.

At Lappeenranta Railway Station, the royal couple was met by a large number of townspeople who gave the visitors a warm welcome. The streets were lined with children waving yellow and blue flags.

The first visit in the town was paid to Saimaa Vocational College; in a simulation laboratory students of the college demonstrated an encounter with people suffering from memory disorders. At Sammonlahti School, ninth graders briefed the king and queen on the study of programming. The pupils had programmed lego robots to wave the Swedish flag and follow a line drawn on the floor.

At the Skinnarila campus, the royal couple also visited Lappeenranta University of Technology, where water purification techniques were among the exhibits.

President Sauli Niinistö and Mrs Jenni Haukio met the royal couple in the City Hall, where they enjoyed a lunch arranged by the City.

After lunch, the presidential couple and the king and queen participated in a cultural event arranged by the Swedish embassy in the Lappeenranta City Theatre. Young people presented a varied programme comprising modern folk dance (Kirjavat), rap by Swedish-speaking Finns (Jesse P.) and circus skills and breakdance (Estradi and the Lappeenranta Dance School).

The afternoon programme included visits to the local Orthodox church and the UPM biorefinery at Kaukas. The state visit ended with a joint press conference by the presidential and royal couples.