Home / Russia one of the themes of discussion in Kultaranta: Where is the bear headed? 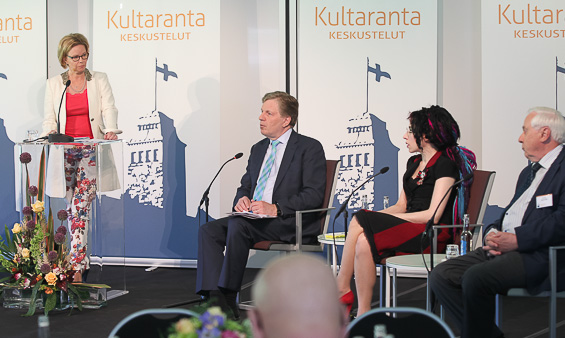 Moderator Seija Rautio, Chairman of the Board Esko Aho, author Sofi Oksanen, and Ambassador Heikki Talvitie. Copyright © Office of the President of the Republic of Finland

Russia was one of the themes at the morning session of the second day of Kultaranta talks on Monday 9 June. Is Russia strong or weak – or both? Where is Russia headed, what are its values? What are the effects of the Ukrainian crisis, and do sanctions have any effect? Does Finland have a NATO option?

According to Professor Hiski Haukkala, we have both a strong and a weak Russia. Russia seems to be strong as it considers itself to be entitled to act as a superpower. Haukkala does not consider the enlargement of NATO as an obvious military threat to Russia but it does make the foundation of Russia’s authority unstable.

According to Esko Aho, Chairman of the Board of the Business Team for Russia, the discussion on Russia in Finland is characterised by an urge to do something quickly, but on the other hand, to patiently consider issues. ”The media is doing its best to encourage a quick resolution. Our relationship with Russia cannot be solved on the basis of news headlines,” said Aho.

Aho sees Finland’s role different now compared to what it was during the Soviet Union. ”In this context, we must find a way to handle our issues with Russia regardless of whether it is strong or weak. Because it is in line with our own national interests.”

According to Emeritus Professor Osmo Apunen, the past couple of decades have been extraordinary as Finland has had a weak Russia on its side for two decades. We are in a new situation: ”Russia has been treated like a kulak who has been deprived of his wealth. We must now adapt to the fact that one European superpower is trying to find a suitable position for itself, and that is causing restlessness.”

Ukraine and the spirit of the times

In his opening speech on Sunday evening, President Niinistö said that the spirit of the times has changed. “Here in Europe, the Ukrainian crisis and steps taken by Russia affect the atmosphere, our current agenda, outlook and expectations to a large extent. And the crisis is still ongoing, too,” said Niinistö.

According to Ambassador Heikki Talvitie, Russia wishes to secure its authority by the takeover of Crimea. ”This is a territorial struggle between the West and Russia.” Hiski Haukkala also thinks that the purpose of Russia’s actions is to ensure that Russia’s interests are continued and that Russia’s authority in the area prevails.

”Russia is more mutually dependent than before but it uses it against others,” said researcher Charly Salonius-Pasternak. ”Since several countries are dependent on Russia, we will not take any serious actions against the fact that Russia is still occupying Crimea.”

The participants did not believe in the efficiency of economic sanctions but they did consider them important. ”It is important that something is being done but does it have any effect?” asked author Sofi Oksanen.  According to Haukkala, sanctions are not efficient but they have a great symbolic value. ”They convey a message; they have a significant value as a signal.”

According to Member of Parliament Paula Lehtomäki, there is too much focus on sanctions and discussion related to them. ”Instead of discussing sanctions, we should help Ukraine get back on its feet.” 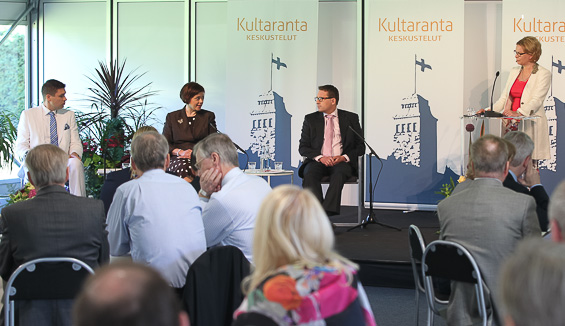 According to Markku Kivinen, the Director of the Aleksanteri Institute, Russia is creating a cultural identity which is increasingly anti-European. Russia aims at modernising its economy but it does not want to become like the West. Russia is still a growing economy but it will try to receive more response from China in the future.

According to Esko Aho, it is important that the West adheres to international agreements and principles. At the same time, we should try to view the matter from Russia’s perspective. ”The perspective is very different from the way in which we view Ukraine in the West.”

According to Sofi Oksanen, Russia aims to create an anti-western atmosphere. Russia is the legitimate successor of the Soviet Union. Propaganda actions are exactly the same as the ones used in the Soviet Union.

Oksanen was also concerned about the renewal of history books in Russian schools. ”They no longer care about historical facts but ideas which are supposed to raise patriotism.” According to Oksanen, an understanding of Stalin’s operation has been reinstated. ”That is not good news to anyone, including the citizens of Russia.”

Minister Jaakko Iloniemi warmed up the audience for the NATO section with the following introduction. ”Finns have practised ’slow thinking’ with regard to NATO already for about twenty years,” he said. ”From a military point of view, Russians view Finland as an accessory of NATO. We share the risks of NATO countries but we do not have any security guarantees.”

According to Henrik Lax, who spoke on behalf of the public, Russia has abandoned Europe’s security system. At the same time, one of the basis for Finland’s security policy has been broken. ”There is now a zone of uncertainty between Russia and NATO.”

Moderator Seija Autio asked the panellists about the importance of NATO’s security guarantees. According to Salonius-Pasternak, it is evident that in case of a crisis, the United States will only defend its NATO allies.  According to Lehtomäki, the starting point is that Article 5 is in effect. Talvitie, on the other hand, thinks that a strong western ally has been tested in the world wars, ”with not so good results.”

Alexander Stubb, Minister for European Affairs and Foreign Trade, emphasised that NATO is not against anyone but for its members. ”None of the NATO member states has ever been attacked.”

According to researcher Pekka Sutela, the enlargement of NATO has meant that Russia’s relationship with the West no longer becomes closer.

According to Minister of Defence Carl Haglund, Finland does not have a NATO option nor a VIP pass but an option to apply for a membership. ”Our security policy cannot be based on a NATO option.”

At the end of the talks, President Niinistö thanked the participants for the discussion. ”It has met the expectations of all of us fairly well.” President paid special attention to ”allocated crises”, which involve information and cyber combat. ”That is why we will discuss cyber and information-related issues today. These are exactly the kinds of issues on which we must be able to look well into the future.”