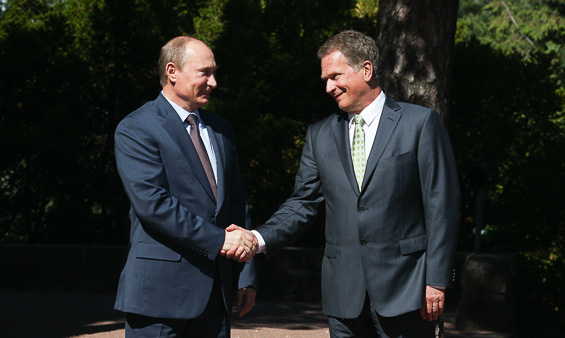 President Niinistö met President Putin in Kultaranta, at the summer residence in Naantali. Copyright © Office of the President of the Republic of Finland

President of the Republic of Finland Sauli Niinistö played host to President of the Russian Federation Vladimir Putin, on a working visit by the latter to Kultaranta on 25 June. Topics discussed by the Presidents included the following: bilateral relations between Finland and Russia, EU-Russian relations and international issues.

In particular, the economy came to the fore at a joint press conference held in the Kultaranta garden. Both expressed optimism with regard to the economic crisis. "We hope that the situation is about to improve. Encouraging signs can already be seen in the world economy", said President Putin. "Trade between Finland and Russia has begun to recover," commented President Niinistö. Such trade is highly varied, "from foodstuffs to ice breakers, fulfilling almost every conceivable human need. This provides an excellent basis for rebuilding our economic partnership", affirmed President Niinistö.

Tourism and travel are also of mutual economic importance to the two countries. "To ease tourism, we are opening a total of ten visa centres in Russia", added President Niinistö. "Over a third of Finland’s tourism revenue comes from Russian tourists, amounting to 858 million euros last year, if I remember correctly", continued President Putin.

Both presidents are content that family issues between the countries have been settled. Official cooperation has improved and the Hague Abduction Convention was adopted between the two countries at the turn of the year. "Hopefully, serious discrepancies on these issues are a thing of the past", President Niinistö affirmed.

During the visit an agreement was signed between Finland and Russia on the transportation of hazardous materials by rail. Partnership agreements were also signed between the Russian Union of Industrialists and Entrepreneurs and the Confederation of Finnish Industries, and between the Skolkovo Foundation and the Finnish Funding Agency for Technology and Innovation (Tekes).

Presidents Niinistö and Putin left Kultaranta on board the yacht Kultaranta VIII, bound for Turku. President Putin gave his views of the G8 summit held in Ireland and the two discussed other international issues, such as the Syria conflict.

In Turku, the two Presidents joined the celebrations of the 60th anniversary of the twin town agreement between Turku and St. Petersburg, at The Forum Marinum Maritime Centre and on the sailing vessel Suomen Joutsen.

"I’ll wager that, of the world’s heads of state, President Putin and I are the two that know most about Turku in particular”, quipped President Niinistö in his speech. Turku and St. Petersburg’s relationship has been a busy one, resulting in high-quality activities on the economic, tourism and cultural fronts.

The two cities are united by the Baltic Sea and their people. Conservation of the Baltic is a critically important goal, and contacts between the city folk have grown."These two cities have done much to ensure that the partnership between the two countries is raised to a new level", stated President Putin.