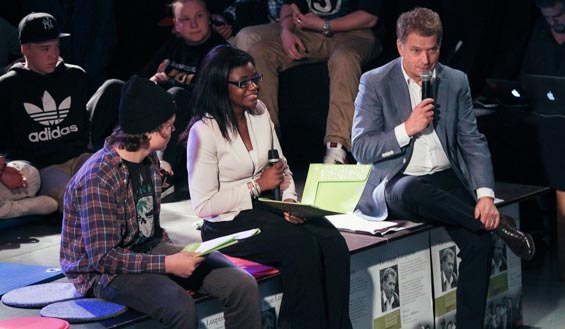 "What things bothered you when you were young?” That was the first question put to the President of the Republic at the Luuppi youth activity centre on Wednesday evening. Some 300 young people met in Kontula in eastern Helsinki for a question-and-answer session with the President on 2 October. The meeting was opened by Hassan Maikal, who first welcomed the President and the young people and then rapped one of his own songs.

The young hosts Leticia Makunda and Maxie Madisson led the group through dozens of questions within one hour: Has inequality increased? Is the youth guarantee working? Why is it so difficult to get a place to study? The programme also included video clips shot and edited by the young people themselves and a discussion of whether it is worthwhile to have a gap year. The young people in the area and youth instructors were closely involved in organising the event, from start to finish.

“If you don’t yet get to decide things, you can always try to influence the people who do,” the President said to the teens.
Many were concerned about how to find a place to study or a job. President Niinistö admitted that it may be more difficult to find a summer job now than it was when he was young. He pointed out that not everyone needs to get into university to study; vocational education is just as valuable. “What is important is that everyone stays involved and that no one is left behind. Peer support among young people is extremely important,” said President Niinistö.

From Greenpeace to Guggenheim

The young people were interested in a wide range of social issues. During the one-hour session, a huge number of topics was covered, from multiculturalism to gender-neutral marriage and from Greenpeace to Guggenheim. What should be done with Lastenlinna Hospital? Why are school lunches so bad? What things can young people actually influence?

The President’s job was also of interest: Why did you want to become President? What are a President’s working days like? What is the most enjoyable thing about the job?

It emerged during the Q&A that Sauli Niinistö’s dream job when he was young was to be a sports commentator. The President also said that he has had the same hobbies ever since adolescence: he continues to enjoy sports and reading. His attitude to school, however, has changed over the years: “I should have made more of an effort when I was at school. My reports were such that I only barely made it to the next grade,” the President explained candidly.

The Q&A was streamed live online and is also available as a recording. Young people from the HattuMedia documentary group, aged 14 to 20, were actively involved in filming and streaming the event.
The programme was implemented together with the City of Helsinki Youth Department. Participants included the Kivikko, Vesala, Laakavuori and Myllypuro youth centres, the departments of the Luuppi centre, Naulakallio School, the upper-level comprehensive school and upper secondary school of Helsingin Yhteislyseo, the upper-level comprehensive schools of Vesala and Sakarinmäki, Elias upper secondary school, the South-Eastern and Vuosaari youth units, the Helsinki Swedish-language youth unit, the youth of Mikaeli Parish, and the Somali youth of Kontula.

Your browser does not support iframes.