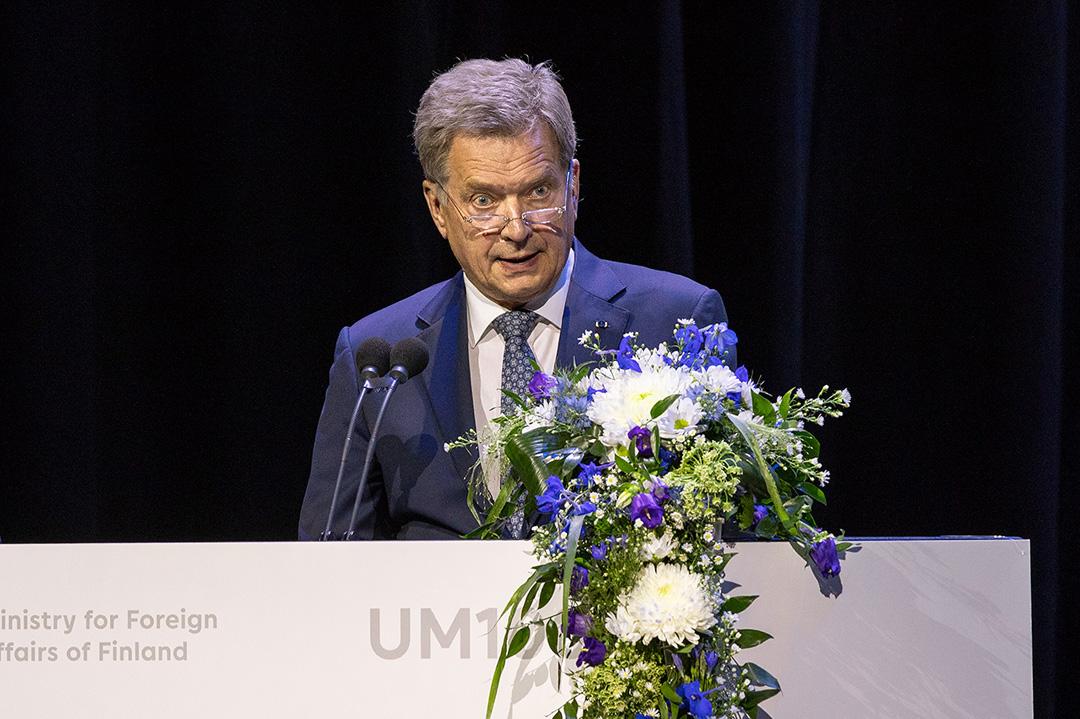 It is a great pleasure for me to join you all in celebrating the first hundred years of the Ministry for Foreign Affairs of Finland.

After gaining its independence in December 1917, Finland was able to build on many existing national institutions. Once the devastating civil war was over, the structures inherited from the autonomy provided a foundation for the creation of the new state.

Yet some vital functions of a sovereign international actor were missing: taking care of its own defence and its external relations. In May 1918 these gaps started to be filled. The ministries of defence and foreign affairs were established. And a year later, the constitution created the office of the president of the republic. Finland could begin its journey in the wider world in earnest.

The management of foreign affairs in Finland began at a turbulent time. The civil war had just ended, and the First World War was still spreading destruction in Europe. The old world order had collapsed, the construction of a new one on its ruins was begun with great difficulty.

In this challenging environment, the Ministry for Foreign Affairs played an important role in securing Finland’s new independence. In addition to national defence, a network of international relations was needed to further strengthen our security. Security was sought not only from bilateral connections, but also from multilateral cooperation in the new world order taking shape.

In spring 1920, President K.J. Ståhlberg and Minister for Foreign Affairs Rudolf Holsti were steering Finland towards the membership of the League of Nations. The vulnerability of the new intergovernmental organisation was anticipated, and it was never believed to be a guarantor of eternal peace. Yet the foreign policy leadership decided that for a country like Finland, it was particularly important to secure without delay the protection the League of Nations may offer.

We are familiar with the fate of the League of Nations. It failed to prevent the Second World War. After the catastrophe, however, the development of a new and stronger rules-based order began. This was done in a world increasingly shadowed by confrontation and arms race. Within the limits of the cold war, Finland with its foreign policy systematically sought its way to the core of this new order. UN membership, hosting the Conference on Security and Cooperation in Europe and joining the Council of Europe consolidated Finland’s position. EU membership was a natural continuation of the same policy. This world order, now in place for several decades already, has served us well. Its rules-based nature has provided also a small country with protection and fair opportunities for success. With our foreign policy, we have given it a lot but received even more in return.

At the moment, I am very worried about the state of this international order. Our rules-based order seems to be challenged from various directions. National security can never rest on general principles alone. But the international order is one of the four pillars of our foreign policy. If international rules and principles crumble away, the pressure on the other pillars will increase substantially. Finland’s interest, in this century as well, is a world not governed by strength, but by the rule of law. The route to an entirely new world order has often passed through big upheavals and human suffering, even collapse. We do not wish to experience anything like that again. While the current system with its institutions is not perfect, defending it and repairing its defects is not only our national interest. It is also the interest of the entire humankind. In this, Finland will need skilful diplomacy and a foreign ministry that stays up to its task.

In 1968, the 50th anniversary of the Ministry for Foreign Affairs was celebrated with a series of articles written by its top officials. In his article, Ambassador Joel Toivola referred to a blunder of the early days of 1918: the name of the ministry had been translated into ‘the ministry of strange affairs’ in the first French documents.

As most of us know, the word ‘affairs’ has recently disappeared altogether from the official Finnish name of the Ministry. But in the future, the Ministry will no doubt have to grapple with strange affairs more often than before. The leading principle of Finnish foreign policy will remain the same: to strengthen Finland’s international position, security and welfare. Yet the environment where this foreign policy is conducted is changing all the more rapidly. The change materialises as unexpected turns in the familiar fields of foreign policy. Geopolitical settings previously taken for granted can suddenly turn upside down. Problems that we considered solved can actualise without warning, and the other way round.

The change can also show as completely new topics, however, that will need foreign policy decisions. Climate change and migration as well as social media and artificial intelligence are recent examples of phenomena that have introduced affairs in the field of foreign policy that would have been strange to earlier generations of diplomats. More new, surprising things are lurking around the corner. They will all have to be managed in the future, along with all the familiar affairs. And not only reactively managed but also proactively anticipated, if possible. In the fast-moving world, the Ministry for Foreign Affairs will need to stay alert. In addition to threats and risks, we also must identify new positive opportunities.

Under the Constitution of the year 2000, Finland’s foreign policy is led by the President of the Republic in co-operation with the Government. With the Ministry for Foreign Affairs, we engage in this co-operation all the time here in Helsinki and through the network of Finland’s missions abroad. In addition to formal channels, we have a lot of informal exchange of ideas.

Your daily work is part of Finland’s foreign policy, its hundred-year continuum, regardless of where you are posted and what your task is. You create the situational awareness to support decision-making. In Finland and abroad, you execute the policy that has been decided. Through your work, you enable high-level international encounters and the strengthening of Finland’s position. I want to thank you for our co-operation so far. I also encourage you to strive for excellence in everything you do. As the Ministry for Foreign Affairs is stepping into its second century, the requirements for foreign policy will be even higher than before, for all of us.

My warmest congratulations to the hundred-year-old Ministry for Foreign Affairs!