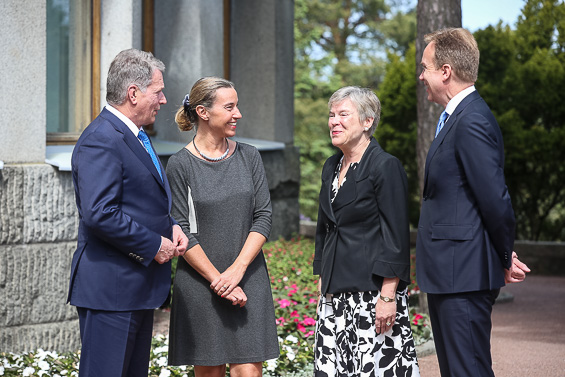 President Sauli Niinistö meets with Federica Mogerini, High Representative of the European Union for Foreign Affairs and Security Policy on 11 June 2017 at Kultaranta before Kultaranta talks of 2017. Photo: Juhani Kandell/Office of the President of the Republic of Finland

The European project was born of war and has sought to ensure peace on our continent, but the aim has been to achieve this without a clear mandate even to broach the matter, let alone act upon it,” said President of the Republic Sauli Niinistö in his opening remarks for the Kultaranta talks on Sunday 11 June, 2017.

The President sees a paradox in this. He noted that, since the establishment of the European Union, Europeans have repeatedly tasted the forbidden fruit of European defence.

“At the same time, the fruit has become less forbidden and the need for a common effort has increased in terms of security.”

What kind of Union does not guarantee the safety of its citizens?

President Niinistö believes that it has become increasingly clear that Europeans should pay more attention to their own security. However, he stressed that European defence cooperation does not mean a common defence, at least not yet. This remains the task of NATO. But there still needs to be a discussion on making Europe more secure.

“I think that the issue can be crystallised as follows: any union worthy of the name should do its part to ensure the safety of its citizens. Over time, this may also mean a common European defence.”

He characterised Finland’s approach as being straightforward.

“We see a great deal of unused potential in the EU’s defence cooperation,” President Niinistö said, confirming that the topic of the opening talk – the future of Europe’s defence institutions – could hardly be more timely.

Trump is not a threat to Europe

“A lot has happened since the last Kultaranta talks,” said Franҫois Heisbourg, the Chairman of the International Institute for Strategic Studies, upon opening the panel discussion. He went on to ask what the participants thought of Angela Merkel’s statement that Europe must take its fate into its own hands.

“In recent months, I have seen a growing need for Europe around the world,” said Frederica Mogherini, High Representative of the European Union for Foreign Affairs and Security Policy. “People need a credible, reliable, strong and multilateral actor.”

Mogherini stated that the idea of taking our fate into our own hands is not due to President Trump’s election, but is a longer-standing process begun on Europe’s own initiative.

“It is important that President Trump has drawn attention to defence expenditure and fair burden-sharing,” said Rose Gottemoeller, Deputy Secretary of NATO.

Gottemoeller said that she was a Democrat in political background. She nevertheless wanted to pose the following question: “Is it possible that Trump’s criticism might result in some good being done in the institutions which he has criticised? Might it lead to some necessary changes?”

All of the panelists agreed that Europeans should take more responsibility for their own security.

“When seeking the deepening of European defence cooperation, what threat concerns you most?” asked Heisbourg.

“Protectionism, nationalism and populism offer easy answers to complex questions. It is a poisonous draught, from which we should not drink,” said Norwegian Foreign Minister Børge Brende.

Brende believes that Europe must not only take greater responsibility for security issues, but also defend free trade, the United Nations and a world order based on common rules, and the Paris Agreement.

“When we talk about taking our destiny into our own hands, we must also formulate our key policy goals,” said Federica Mogherini. “After sixty years, we have a union that is large, strong and experienced enough to define what kind of common defence we are seeking.”

President of the Republic Sauli Niinistö hosted the Kultaranta talks for the fifth time. The Kultaranta talks provide an open exchange of views and a discussion forum. This year’s theme is the future, explored from the security, policy and economic perspectives.