Home / President Niinistö during President of Mozambique’s working visit: All work for peace is valuable

At a joint press conference after the discussions, President Niinistö said that the Russian invasion has caused great suffering in Ukraine, but also great problems in other parts of the world, for example in terms of energy supply and food security. “In this respect, we share the view that it is necessary to achieve peace at some point and that all the work towards it is valuable.”

Accompanied by an economic delegation

“As far as Finland is concerned, we want to say that equality, education and good governance have played a key role in making Finland a welfare state. We are ready to share these experiences with you at any time.”

Moreover, president Niinistö raised the issue of climate change, which also affects Mozambique. This year, Mozambique joined the Coalition of Finance Ministers for Climate Action, which has been chaired by Finland. “It is one way for international cooperation to seek solutions,” he said.

Later on Wednesday, President Nyusi will meet with Speaker of Parliament Matti Vanhanen, Prime Minister Sanna Marin and Minister for Foreign Affairs Pekka Haavisto. In addition, he will meet with his Finnish pen pal from approximately 50 years ago.

On Thursday 17 November, President Nyusi speaks at a seminar on business opportunities between Mozambique and Finland organised by Business Finland and visits Finnish companies. He will also become acquainted with the Finnish education system at University of Helsinki Viikki Normal School and Omnia, the Joint Authority of Education in the Espoo region. Finland has particularly supported the development of basic education in Mozambique. 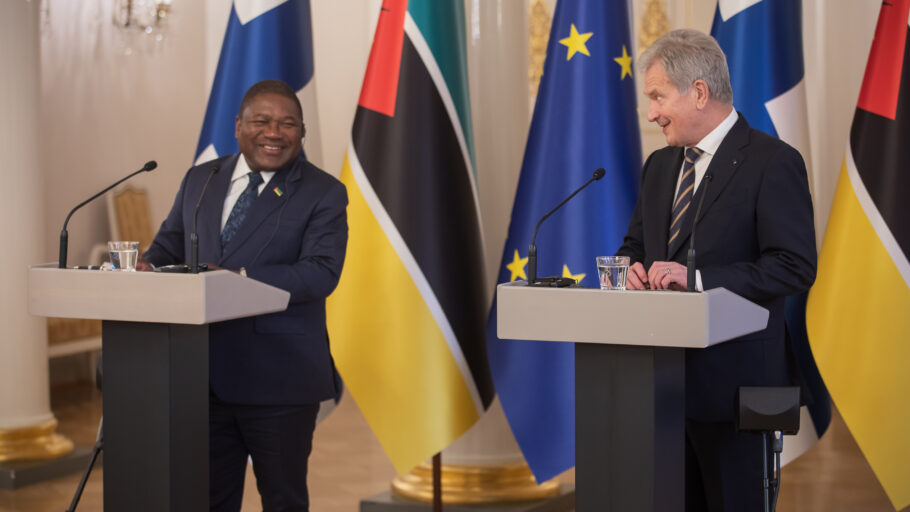