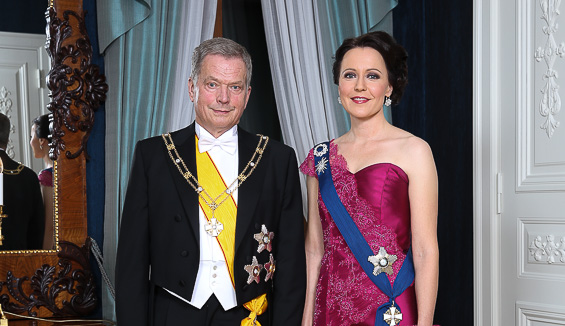 President of the Republic, Sauli Niinistö, and his spouse, Jenni Haukio, hosted the Independence Day Reception at the Presidential Palace on Saturday 6 December 2015.

Guests representing the full spectrum of contemporary culture and minority cultures were also invited, including a number of people engaged within culture and in cultural activities at a grass-roots level.

In keeping with tradition, invitations had been sent to all members of the Government, Members of Parliament and Finnish Members of the European Parliament, as well as senior civil servants and the diplomatic corps accredited to Finland. Other guests included Finns from various sectors of society who have distinguished themselves in one way or another, and people whom the President and his spouse have met during the past year. A total of around 1,800 guests have been invited.

Background music during the handshaking ceremony and dance music later on in the State Hall was be provided by the Guards’ Band under the direction of the Chief Conductor of the Finnish Defence Forces, Lieutenant Colonel Jyrki Koskinen, and the Head of the Guards’ Band, Major Pasi-Heikki Mikkola. Music by Sibelius was be prominent during the handshaking, while Olavi Virta and Toivo Kärki, popular music greats whose anniversaries are celebrated this year, featured a lot during dancing. The Guards’ Band Combo played light dance music during the evening, led by Captain Lassi Ikäheimo and with Aili Ikonen as vocal soloist.

The traditional buffet included light savoury and sweet refreshments and titbits. The food had been ordered from around Finland, also taking into account the cultural theme and anniversaries.

The Sibelius anniversary was also celebrated in the foyer of the Mariankatu entrance in the form of Sibelius photos by Aho & Soldan.