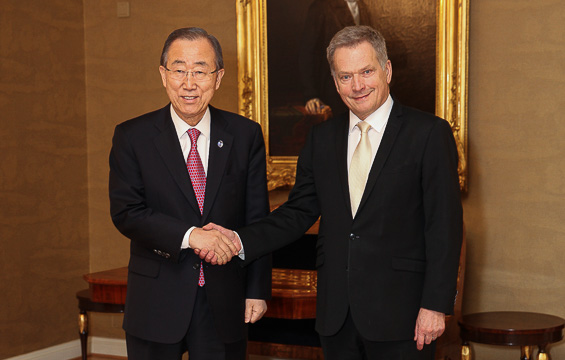 Mr Ban Ki-moon, General Secretary of the United Nations, and his wife Ban Soon-taek visited Finland on 8–9 December 2015 at the invitation of President of the Republic Sauli Niinistö. President Niinistö and his spouse Jenni Haukio received the General Secretary and Mrs Ban at Mäntyniemi on the morning of Wednesday 9 December and welcomed them to breakfast.

General Secretary Ban and President Niinistö and their spouses then attended the 60th anniversary festivities of Finland’s UN membership at Finlandia Hall, where both men gave a speech.

Official talks between the General Secretary and the President were held at the President’s Palace; the agenda included climate change, anti-terrorist activities and UN peacekeeping operations, and the refugee crisis.

“We shared the same feeling of the openings of Paris COP 21,” said President Niinistö at the press conference after the talks. “That is that the sentiment was different, it was more cooperative, it was more positive amongst the leaders of the world, and that is a very good sign. So we hope that you continue your very important work and you will be successful having an agreement in Paris.”

President Niinistö noted that everyone in the world is dependent on one another and that climate change is our common enemy. “But we have met another common enemy, and that is terrorism, which has once again shaken our feelings,” the President continued. “We consider that it is most important that your [the UN’s] activities in building up peace in Syria, in Ukraine, will continue, because that is the only possible solution also for the problem of refugees which is here in Europe […] very difficult at the moment.”

General Secretary Ban arrived in Helsinki directly from the Climate Change Conference in Paris and returned to resume talks there. The General Secretary commended President Niinistö for commitment and participation in the efforts to combat climate change. “This is a critical moment for all countries to come together for the sake of our planet and this humanity,” said General Secretary Ban.

The talks of the General Secretary and the President also touched on sustainable development and the 2030 Agenda for Sustainable Development.  At the lunch served at the President’s Palace, guests included Prime Minister Juha Sipilä and Presidents Martti Ahtisaari and Tarja Halonen.

During his visit to Finland, General Secretary Ban also met Speaker of Parliament Maria Lohela, the members of the Foreign Affairs Committee and Foreign Minister Timo Soini. Mr Ban was given a tour of an asylum seekers’ reception centre by Minister of the Interior Petteri Orpo.

This year will mark Finland’s 60th anniversary in the UN. Finland was admitted to UN membership on 14 December 1955. Finland submitted its membership application as early as in 1947. The UN has retained its position as the cornerstone of Finland’s foreign policy. Recently, Finland has asserted itself especially throught mediation and the promotion of women’s rights.