Where the Presidential Palace is now, there was still at the beginning of the 19th century a salt storehouse. J.H. Heidenstrauch, at that time one of the elite of the town’s merchants, purchased the entire lot and erected there a stately residence designed by architect Pehr Granstedt.

Pickaxe and builder’s trowel turned the old salt storehouse into an unexpectedly fine creation. The beam ceiling above the row of columns in the middle section had framed settings, and everything was so well proportioned that the house with its two wings more resembled a palace than anything else. In 1837 it actually became one when the construction committee purchased it for the price of 170 000 roubles for official use.

The necessary rebuilding and furnishing work was directed by architect C.L. Engel, creator of the neoclassical Helsinki. All the timber storehouses behind were torn down and a new wing added. This wing, built along the north of the courtyard, contained on the second floor the chapel (the present library), ball room, banquet hall in direct connection with the earlier reception floor of the main building, as well as a tremendous kitchen with the necessary pantries and sculleries on the bottom floor. For three years the best craftsmen in town worked on the palace, with quite good effect.

The Palace was completed in 1845, though repairs had to be made from time to time as mostly it stood empty and was not regularly heated. It was visited for the first time by a members of the imperial family as late as 1851. The visitor was the young heir apparent Alexander Nikolayevitsh (later Czar Alexander II). During Alexander II’s reign the Palace had its most brilliant time. The Czar visited the city three times (1856, 1863, and 1876), staying on each occasion at the Palace.

1863 is a memorable year in the history of the building. The Finnish Parliament was to be opened by the Czar in the Great Ballroom. The Ballroom was accordingly converted into a throne-room, with the imperial throne in the background.

With Alexander II’s death came the end for ever of imperial festivities in the Palace. The iron gates were kept closed. The house was certainly well kept: as late as 1905 a reception suite was added to it by Jac. Ahrenberg. This included the large state reception room with the beautiful front hall where “Psyche and Zephyr” by Walter Runeberg, was placed – the statue had been purchased for the art collections of the Palace in anticipation of the Czar’s visit in 1876 – and a reception vestibule facing Mariankatu Street.

Different kinds of use

Under the aggravated political conditions of World War I the residence was converted into the Military Hospital of the Finnish Senate. In 1917-18 the revolutionary council of the soldiers and workers stayed in the house, and during the very first years of Finland’s independence one of the upper floors served as the Ministry for Foreign Affairs.

In regard to the practical application of the country’s new constitution it was clear that the most suitable residence for the President was in the former imperial palace. Complete repairs were made at speed, the furnishings and art collections were supplemented. One year’s work left all the rooms ready for use again. Since then, both everyday and ceremonial life move in an already established rhythm in the notable house in the North Esplanade.

It contains the Office of the President of the Republic and the premises used by the President for official functions and receptions. These include the annual Independence Day (6 December) reception and various other high-level festive functions, in addition to meetings and consultations. The Palace has nearly 3,000 square metres of floor space.

Virtual tour of the Presidential Palace 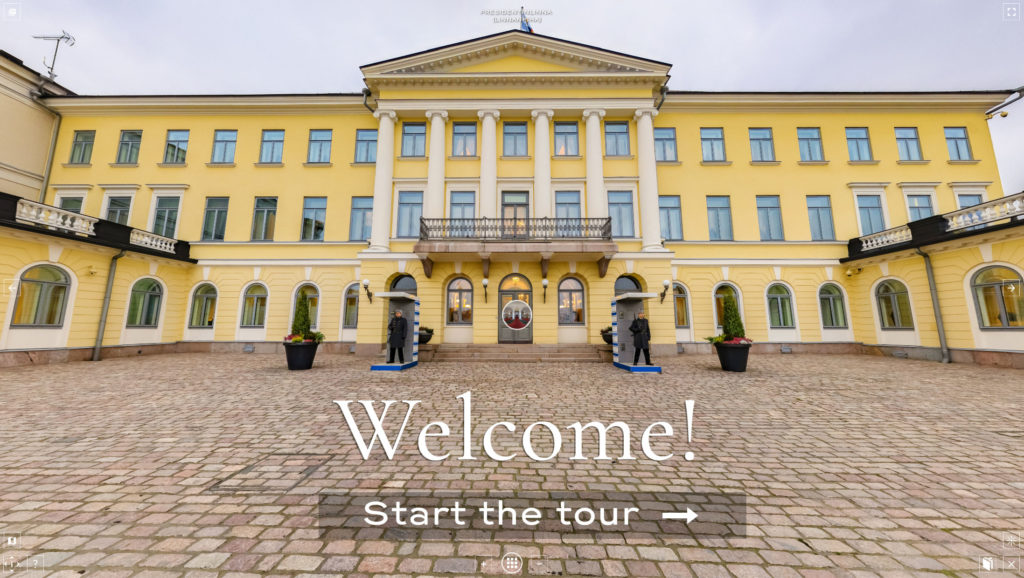 Brochure of the Presidential Palace (PDF)