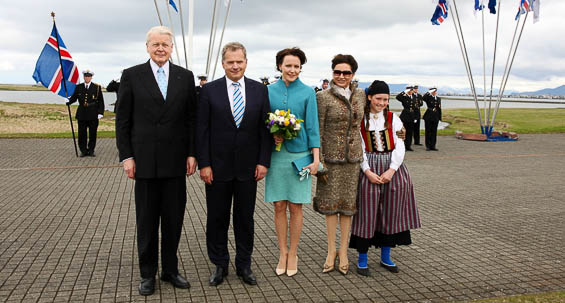 President of the Republic Sauli Niinistö and spouse made a state visit to Iceland on 28–29 May. At the start of the visit President Niinistö held talks with Iceland’s President Òlafur Ragnar Grímsson.

The presidents discussed bilateral relations between Finland and Iceland, cooperation in the Arctic regions, and Nordic cooperation on foreign and security policy. The future of Europe and the state of play in Iceland’s negotiations for EU membership also featured.

"Whether we are talking about Nordic, European or Arctic cooperation, Finland and Iceland share much in common," President Niinistö said at a press conference after the meeting. "Nordic cooperation has increased rapidly in recent times, and Finland’s decision to participate in exercises together with Iceland’s air surveillance is expected in the near future. We would also be pleased to see Iceland in a position to strengthen Nordic thinking from within the EU, but this discussion and decision is naturally in Iceland’s own hands."

In the afternoon President Niinistö visited Iceland’s parliament, and took part in a panel discussion at the University of Iceland on the future of the Arctic regions.

In his opening speech President Niinistö said that Finland’s northerly location had long been perceived as a burden, but could now be considered as a resource. "New opportunities in the North also open up new vistas for us. These include minerals and mining industry, new logistics solutions, tourism and technology," said President Niinistö.

According to the President, Finland has great strength in Arctic expertise, embracing shipbuilding, environmental technology, energy efficiency, Arctic construction, meteorology and research. Active international cooperation will nonetheless be required if we are to benefit from these opportunities, and to respond to the challenges. The principal challenge, President Niinistö reminded us, will lie in our response to climate change and ensuring sustainable development with regard to the environment.

On the second day of the state visit President Niinistö met Iceland’s Prime Minister Sigmundur David Gunnlaugsson, and visited the University of Reykjavik, which specialises in IT-sector education, New Economy and technology, as well as start-up business activity. The programme also included a tour of the Svartseng geothermal power station and the Thingvellir National Park.

A special programme for the visit had been arranged for the President’s spouse, Mrs Jenni Haukio. The programme included an inspection of the child welfare activities of The Children’s House, and a visit to the memorial home of Iceland’s Nobel laureate Halldór Laxness, while Mrs Haukio also met Icelandic writers.