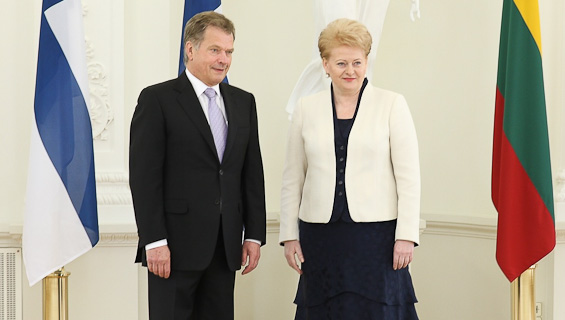 Energy cooperation and current European matters were on the agenda on the state visit made by President of the Republic Sauli Niinistö to Lithuania on 14–15 May.

At the start of the visit, President Niinistö talked to Dalia Grybauskaite, President of Lithuania, focusing on relations between Finland and Lithuania, with special reference to economic and energy cooperation. The discussion also covered cooperation in the Baltic Sea region, current European matters and international issues.

The talks further concerned preparations for the forthcoming Lithuanian EU Presidency, which will begin in July. Lithuania aims to join the euro in 2015.

On Tuesday, President Niinistö also visited the European Institute for Gender Equality and the University of Vilnius.

In connection with the state visit, a high-level forum focusing on energy issues was held; its Finnish participants were Jan Vapaavuori, Minister of Economic Affairs, and representatives of energy companies.

On the second day of the state visit, the Presidents of Finland and Lithuania attended the inaugural ceremony of the Fortum combined heat and power plant in Klaipeda. This plant is the first power plant in the Baltic countries that uses community waste as its fuel.

President Niinistö also visited the Baltija Shipyard and the Curonian Spit, a sand dune peninsula on the Baltic Sea that has been designated a UNESCO World Heritage site.