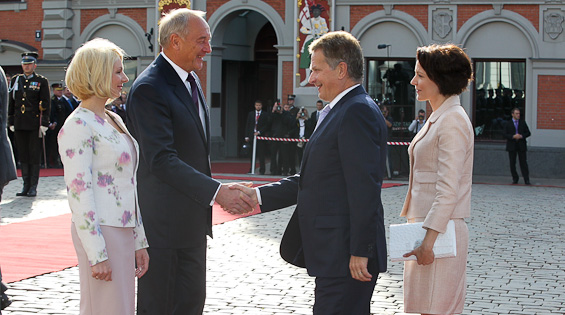 The economic situation in Europe and energy cooperation around the Baltic Sea were key issues discussed by President of the Republic Sauli Niinistö with President Andris Berzins of Latvia on his state visit to Riga on 10 September. The Presidents also discussed bilateral relations between Finland and Latvia and current issues in foreign and security policy.

President Niinistö congratulated Latvia on joining the eurozone as of the beginning of 2014 and stated that Finland is supporting Latvia in her OECD membership negotiations, which are due to begin towards the end of the year.

“We are very pleased with Latvia joining the euro. Latvia is on the right path and making good progress. There are 340 Finnish companies operating in Latvia today, and our economic relations have further potential,” said President Niinistö at the press conference after the talks.

Other topics discussed included the success of Finnish schoolchildren in PISA surveys. The President of Latvia was very interested in the Finnish school system.

The foreign policy discussion touched on trans-Atlantic relations, eastern partnerships and the situation in Central Asia.

President Niinistö and his spouse Jenni Haukio are on a state visit to Latvia from 9 to 11 September. In addition to talks between the Presidents, the programme includes meetings with Prime Minister Valdis Dombrovskis and with Solvita Aboltinas, Speaker of Parliament. President Niinistö is also visiting the Museum of the Occupation of Latvia and the gas storage facility at Inčukalns.

The President’s entourage includes Minister of Economic Affairs Jan Vapaavuori and a business delegation from the energy sector. A Finnish-Latvian economic summit with a specific focus on cooperation in the energy sector is being held in connection with the state visit.

On Wednesday 11 September, the programme will feature a visit to Jelgava, where both Presidents will attend the inaugural ceremony of the Fortum biomass power plant. They will also visit the University of Jelgava.