Home / Finland 100: Nordic heads of state to celebrate the anniversary of Finland’s independence

Nordic heads of state will celebrate the centenary of Finland’s independence in Helsinki on Thursday 1 June 2017. President of the Republic Sauli Niinistö and Mrs Jenni Haukio will be the hosts for the day.

The presidential couple will welcome Queen Margrethe II of Denmark, King Carl XVI Gustaf and Queen Silvia of Sweden, King Harald V and Queen Sonja of Norway and President Guðni Thorlacius Jóhannesson and his spouse, Eliza Jean Reid, of Iceland in ceremonies beginning in the forecourt of the Presidential Palace at 10.30 am. After the ceremonies, the presidential and royal couples will greet the public from the balcony of the Presidential Palace. The general public can watch the guests arrive at the Market Square (Kauppatori in Finnish) and Pohjoisesplanadi.

To the City Hall on foot

In addition, the presidential and royal couples will watch a Dancing Finland (Koko Suomi) dance event, held in the Market Square, from the balcony of the City Hall. The performance will include Humppa and street dance. For more detailed instructions on where members of the public will be located, see the map on the website of the Office of the President of the Republic. It is best to enter the area along the Esplanade.

The visits will culminate in a banquet

In the afternoon, President Niinistö, Mrs Haukio and the Nordic heads of state will participate in the re-inauguration of the Hanasaari Swedish-Finnish Cultural Centre. Gunvor Kronman, the CEO of Hanasaari, will host the event.

The guests will also visit the Sibelius Monument in the Sibelius Park, where they will hear singing by the choir of the Helsinki Music Centre, among other performances. The park will also be open to the public, but the actual public event for the head of states’ visit will be arranged at the day’s beginning, in the Market Square and Pohjoisesplanadi. The day will end with a banquet in the Presidential Palace.

Yle will broadcast part of the visit live on television and on Yle Areena. Members of the public can participate in the day via the social media by using the hashtags #FInland100 and #together.

Special traffic arrangements will be made in Helsinki for the day. The Helsinki Police Department will make more detailed announcements on these.

Map for the public 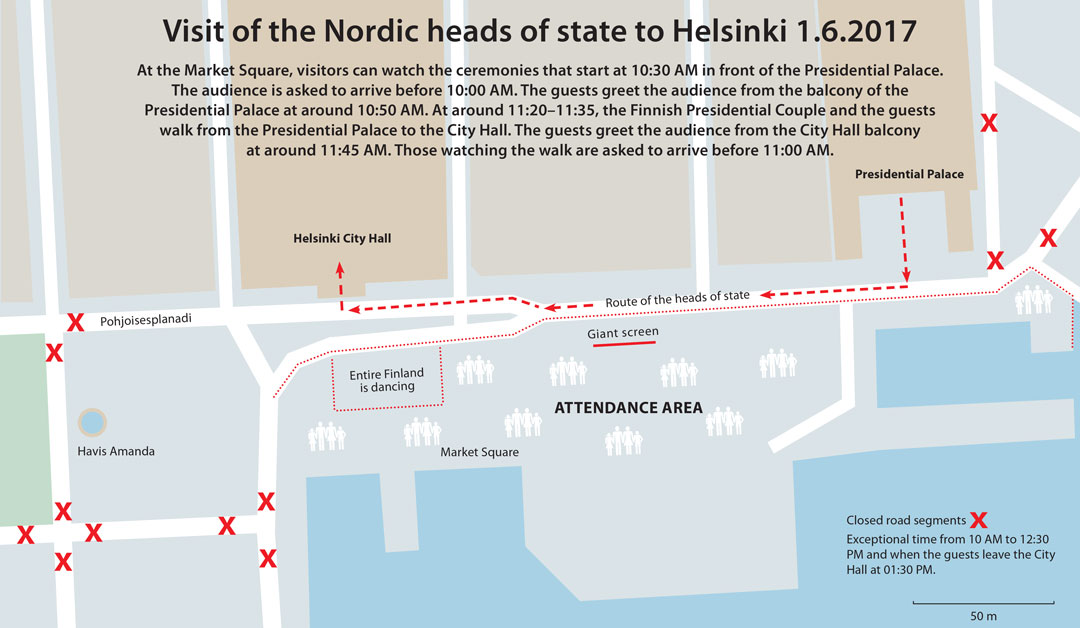