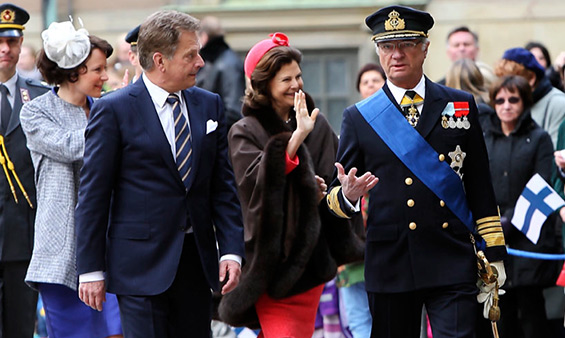 President Niinistö and his spouse made a state visit to Sweden in April 2012. Copyright © Office of the President of the Republic of Finland

H.M. King Carl XVI Gustaf and H.M. Queen Silvia of Sweden will arrive in Finland on a state visit from 3 to 5 March 2015, by invitation of the President of the Republic Sauli Niinistö. President Niinistö and his spouse Mrs. Jenni Haukio will receive the King and Queen at the Presidential Palace before noon on Tuesday, 3 March.

The King and Queen will meet representatives of Finnish politics, business and culture, and particularly young Finns. The programme also includes a visit to Lappeenranta. More details on the programme for the state visit will be announced at a later date.

Members of the state visit delegation will include Swedish Minister for Foreign Affairs Margot Wallström och Minister for Education Gustav Fridolin as well as a delegation of business leaders.

President Niinistö and his spouse made a state visit to Sweden at the beginning of the current presidential term in April 2012. H.M. King Carl XVI Gustaf has made state visits to Finland in the presidential terms of four Presidents, in 1974, 1983, 1996 and 2003.