President of the Republic Sauli Niinistö and President of the Russian Federation Vladimir Putin had a conversation by phone late on Wednesday 23 July. The teleconference was held at Finland’s initiative.

The principal topic in the conversation was the Ukrainian crisis. President Niinistö noted that the shooting down of the Malaysian passenger aircraft must be subjected to an impartial and independent international inquiry and that it would be reprehensible to obstruct or jeopardise that inquiry. President Niinistö appealed to President Putin for Russia’s full cooperation in finding a peaceful solution to the Ukrainian crisis and to the investigation of the airliner incident. He also said that the downing of the plane deepened the crisis, which is now spiralling increasingly out of control.

President Putin said that Russia is in favour of a comprehensive, independent inquiry into the shooting down of the Malaysian aircraft. He also emphasised the importance of reaching a ceasefire in Ukraine quickly. 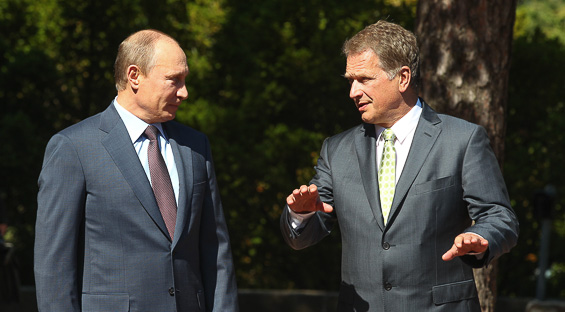 President Putin and president  Niinistö in Kultaranta, Naantali, in June 2013. Copyright © Office of the President of the Republic