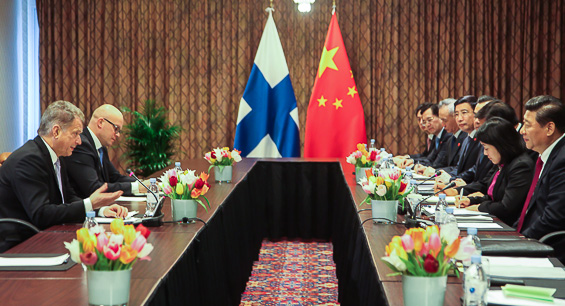 President of the Republic Sauli Niinistö met with Mr Xi Jinping, President of the People’s Republic of China, on Sunday 23 March 2014 in Noordwijk, Holland. The two presidents discussed topical bilateral and international issues.

The Ukraine crisis took centre stage in their discussion of international issues. Both presidents were of the view that the entire international community should do everything in its power to prevent the crisis from escalating and to encourage the participants to seek a peaceful, negotiated solution. They also said that the crisis must not be allowed to disrupt the stability of Europe.

Chinese-Finnish economic cooperation, and Finland’s cleantech expertise in particular, were among the bilateral issues that came to the fore. Cleantech is one of the focus areas of the so-called cooperative partnership between China and Finland. The presidents agreed on this partnership during their first meeting, held in China last April. At their meeting in Holland, the presidents emphasised the importance of this partnership and expressed their support for the continuance of the related negotiations.

Both President Niinistö and President Xi Jinping will participate in the international Nuclear Security Summit, to begin in The Hague on Monday.