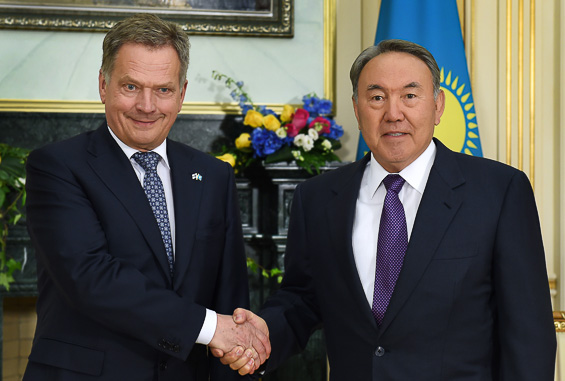 President of the Republic Sauli Niinistö met Kazakhstan’s President Nursultan Nazarbajev on Tuesday 9 June in Astana. The main topic of the presidents’ talks was the Ukrainian crisis and attempts to solve it.

“The situation seems to have bogged down. The implementation of the Minsk Agreement has not progressed to a sufficient degree,” President Niinistö said after the discussions.

In addition to the Ukrainian crisis, the Presidents discussed the overall international situation and the cooler relations between Russia and the West.

On Monday 8 June, President Niinistö held a telephone conversation with Ukrainian President Petro Poroshenko. President Nazarbajev has also promoted a negotiated solution over Ukraine and has kept in touch with the parties involved.

The discussions also touched on bilateral relations between Finland and Kazakhstan. Kazakhstan is making large investments in construction and infrastructure, and trade between the countries is growing. Kazakhstan is interested in Finland’s expertise in innovation, the education sector and cleantech.