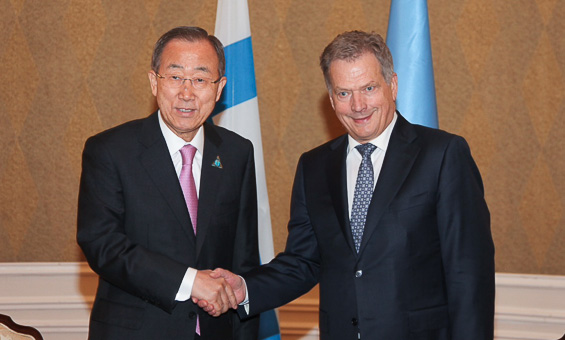 President of the Republic Sauli Niinistö met UN Secretary-General Ban Ki-moon in Astana, Kazakhstan, on Wednesday 10 June. The senior statesmen shared their views on the Ukrainian crisis and the resulting international situation, as well as on the diplomatic efforts to end the crisis.

Other topics of discussion included the UN’s role in resolving the Ukraine crisis and cooperation between the UN and the OSCE. Secretary-General Ban thanked Finland and President Niinistö for the role they have played in seeking a solution to the crisis.

In addition, the discussion touched upon global development issues, preparations for the Post 2015 summit in the autumn – at which sustainable development goals will be discussed – and climate change negotiations.

President Niinistö is paying an official visit to Kazakhstan on 9–10 June. On Wednesday, he participated in the Congress of Leaders of World and Traditional Religions held in Astana, which Secretary General Ban also attended.

On Tuesday, President Niinistö discussed the Ukrainian crisis with Nursultan Nazarbajev, the President of Kazakhstan.