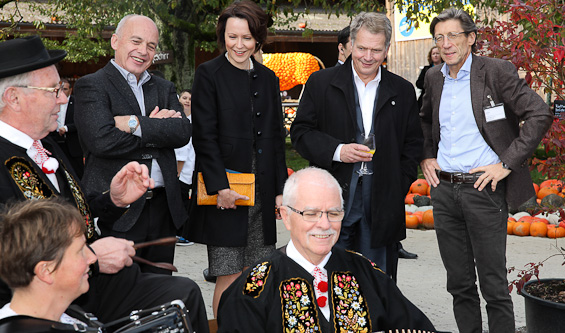 President Sauli Niinistö and spouse Jenni Haukio discussing with President of the Swiss Confederation Ueli Maurer and his daughter on train to Lucerne. Copyright © Office of the President of the Republic of Finland

“We would very much like to engage in closer cooperation in the area of peace mediation, because we have a lot to learn from Switzerland," said President of the Republic Sauli Niinistö at a press conference in Bern, Switzerland on 15 October. He emphasised the need for closer political cooperation between Finland and Switzerland also in his speech in the Swiss Parliament. The President said that Switzerland’s peace mediation operations are an inspiration for Finland and that he hoped to see cooperation extending to conflict prevention. “We also have shared interests in security policy and defence cooperation,” remarked President Niinistö. Ueli Maurer, the President of Switzerland, also referred to security policy and defence cooperation as the principal themes for talks.

President Niinistö further noted that he hoped that Finland could learn from Switzerland in the area of vocational education. He feels that successful vocational education is what explains Switzerland’s low youth unemployment rate. “This is a serious problem, and here it has been excellently managed,” said President Niinistö in tribute to the Swiss.

The President pointed out that past or present successes are no guarantee for the future: “We are living amidst political and economic upheavals. Adapting our societies and our economies to the challenges of the future is the most difficult task facing political decision-makers. I believe that it will benefit both our countries to address these challenges together,” said President Niinistö in describing that he is seeking closer contacts with Switzerland in a number of fields.

Environmental expertise emerged as the key subject under the theme of the economy. “Finland and Switzerland both have cleantech expertise, and enterprises in both our countries would benefit from cooperation,” said President Niinistö. This would be particularly fruitful in the area of research and innovation, a strong suit for both countries.

President of the Republic Sauli Niinistö and his spouse Jenni Haukio are on a state visit to Switzerland on 15–16 October 2013. The visit began in Zurich on Tuesday morning with the visitors being welcomed by Ueli Maurer, President of Switzerland. The two Presidents and their entourages then travelled from Zurich via Luzern to Bern, where the official reception ceremony, the Presidents’ speeches and official talks were held.

On Wednesday 16 October, President Niinistö is being introduced to the engineering and rescue activities of the Swiss Defence Forces at Bremgarten and will visit a hydropower project at Linth-Limmern and the space technology company RUAG Space at Oerlikon.

The President’s entourage includes Minister of Defence Carl Haglund and a delegation of corporate leaders. A forum on closer economic cooperation between the two countries is being held in connection with the visit.

Mrs Jenni Haukio has a separate programme, including a visit to the Zurich University of the Arts and the Abegg Foundation, which collects and researches historical textiles.