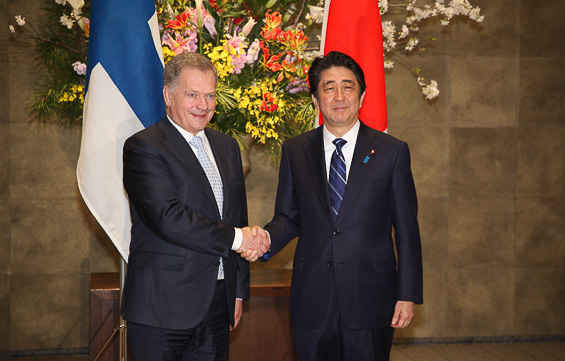 President Sauli Niinistö and Prime Minister of Japan  Shinzo Abe met on 10 March in Tokyo. Copyright © Office of the President of the Republic

Finland and Japan are building a new strategic partnership, including closer cooperation in terms of political ties and in the areas of the economy, science and technology, education and equality, as well as Arctic issues. During an official visit to Tokyo on Thursday 10 March, President of the Republic Sauli Niinistö discussed bilateral cooperation between Finland and Japan with Japanese Prime Minister Shinzo Abe.  A joint statement on the strategic partnership was issued in connection with the meeting.

President Niinistö stated that bilateral relations between Finland and Japan are excellent and are based on common values, trust and mutual respect. Japan is one of Finland’s key economic partners outside the EU and a major investor in the country. “In recent years, the Japanese have made several major investments in Finnish companies, which have proven to be successful,” President Niinistö said at a press conference held after the meeting.

There are more opportunities for cooperation in areas such as the forest industry, the energy sector and nuclear safety, as well as the various ICT sectors. In addition, frequent direct air links between the two countries and increasing tourism and cultural ties are bringing them even closer together.

The discussions also covered the international situation and regional issues such as North Korea and the disputes over the South and East China seas, as well as the situation with regard to asylum seekers in Europe and relations with Russia.

President Niinistö and his spouse Mrs Jenni Haukio are on a state visit to Japan from 7 to 11 March 2016. The presidential couple was received earlier on Thursday by Japanese Emperor Akihito and Empress Michiko.

During the three-day visit, President Niinistö has met with Japanese political leaders and business representatives, including Tadamori Oshima, Speaker of the House of Representatives of Japan; Gen Nakatani, Japan’s Minister of Defence, as well as leading figures from Keidanren, the Japan Business Federation. On Wednesday, a seminar was arranged in the Japanese National Diet Building on economic relations between Finland and Japan and the strategic partnership between the countries. The visit began on Tuesday in Japan’s former capital, Kyoto, where the presidential couple familiarised themselves with the country’s history and culture and met representatives from the prefecture.