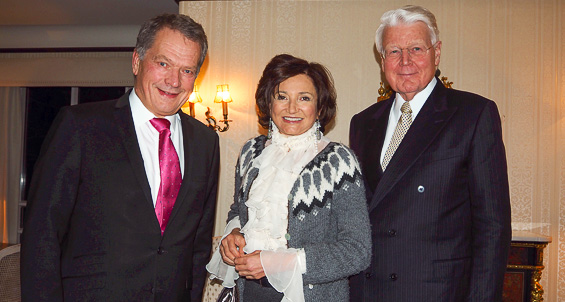 President Sauli Niinistö with President of Iceland Ólafur Ragnar Grímsson and his spouse Dorrit Moussaief. Copyright © Office of the President of the Republic

President of the Republic Sauli Niinistö met with his Icelandic peer, Ólafur Ragnar Grímsson, in Reykjavik, the capital of Iceland, on 30 October 2014. The presidents discussed issues such as international relations, matters concerning the Arctic, as well as the international situation, particularly with respect to Russia and the Ukraine crisis.

They affirmed that Iceland and Finland have a close relationship which will be further strengthened by closer cooperation over Arctic and Nordic issues. Economic relations between the two countries, on the other hand, are comparatively modest. However, greater economic activity in the Arctic region will reinforce economic relations, particularly in terms of Arctic technology.

President Niinistö reiterated Finland’s view that the EU should be granted observer status on the Arctic Council. Finland also backs a plan to establish the Arctic Council as an international treaty-based organisation.

In addition, the Presidents discussed the parliamentary elections held in Ukraine on 26 October and affirmed that the government of Ukraine should continue with the reforms it has begun. President Niinistö regarded the implementation of the peace process and respect for Ukraine’s sovereignty and territorial integrity as key issues. He also stated that the parliamentary elections in Ukraine had proceeded well, given the challenging circumstances in which they were held.

President Niinistö is in Reykjavik to participate in the Arctic Circle Assembly. This regular assembly was established on the initiative of the President of Iceland in 2013. Arctic Circle is a forum in which political decision-makers, representatives of business life, researchers, environmental experts and indigenous peoples can engage in discussion. The idea is to focus attention on the rapid changes occurring in the Arctic region. President Niinistö will give a speech at one of the opening sessions of the assembly on Friday 31 October 2014.