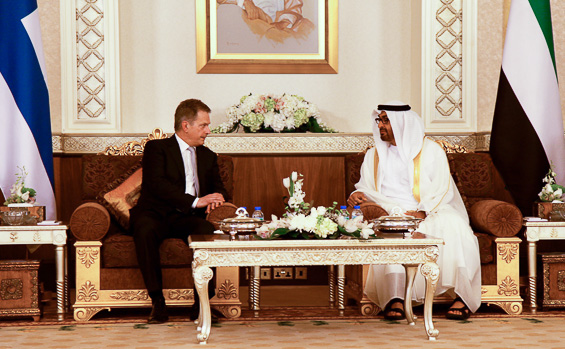 President of the Republic Sauli Niinistö met political leaders of the United Arab Emirates in Abu Dhabi on Sunday 12 April. Discussions with the Crown Prince of Abu Dhabi, Sheikh Mohamed bin Zayed Al Nahyan, covered the general regional situation in the Middle East, with a particular focus on the situation in Yemen and Iran and international issues, the Ukrainian crisis and Russia. Bilateral and commercial relations between Finland and the United Arab Emirates, particularly Finnish health-sector expertise and the related activities at national level, were also discussed. Several ministers and other leaders of the United Arab Emirates participated in these discussions.

President Niinistö is on a working visit to the United Arab Emirates from 11 to 13 April 2015. On Saturday, President Niinistö met the emir of Dubai, Sheikh Mohammed bin Rashid al Maktoum, the Vice President and Prime Minister of the United Arab Emirates. Topics at the meeting included the situation in the Middle East and measures against the terrorist organisation ISIS, Dubai’s development prospects and the 2020 World Expo, to which Finnish business and innovation expertise were given a warm welcome.

The programme for the visit also includes a visit to the eco city of Masdar, which specialises in renewable energy and cleantech.

The United Arab Emirates is one of Finland’s key trading partners in the Middle East region. Interest in the country is high not only in industrial exports but also in Finnish expertise in the education and health care sectors, and a range of business opportunities exist for high tech and cleantech expertise.

The promotion of investment in Finland will also be highlighted. An accompanying delegation of business leaders will participate in the visit. 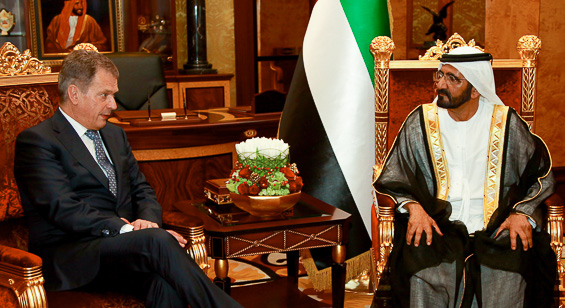