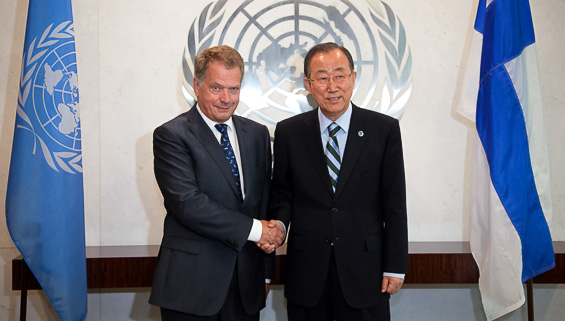 President Niinistö is in New York to participate in the opening of the 69th session of the UN General Assembly.  The President will deliver Finland’s statement as part of the general debate on Wednesday 24 September.

Prior to the opening of the General Assembly, on Monday, 22 September, President Niinistö will participate in the World Conference on Indigenous Peoples where he will speak on behalf of the group of western countries. On Tuesday, 23 September he will attend the Climate Summit hosted by the Secretary General of the UN, in which he will deliver Finland’s statement and act as a co-chair in the discussion on climate, health and jobs. The programme will also include bilateral meetings.

President Niinistö will head the Finnish delegation at the UN General Assembly. Minister for Foreign Affairs Erkki Tuomioja, Minister for International Development Pekka Haavisto and Minister of the Environment Ville Niinistö will also participate in the opening week.