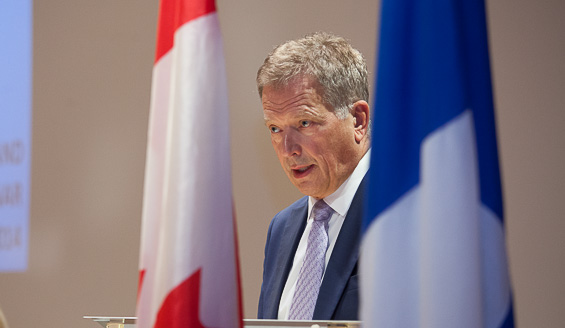 President of the Republic Sauli Niinistö and Mrs Jenni Haukio will make a state visit to Canada from 8 to 11 October 2014.

The visit will begin in Ottawa where, on 9 October, President Niinistö will meet Governor General David Johnston, Speakers of the Senate and the House of Commons, and Prime Minister Stephen Harper. The main themes of the discussions will be bilateral relations between Finland and Canada, as well as economic opportunities and Arctic cooperation. Canada is chairing the Arctic Council from 2013–2015 and Finland will become Chair in 2017.

The President’s delegation will include Minister of Economic Affairs Jan Vapaavuori and a delegation of business leaders.

President Niinistö discussed the forthcoming state visit on Monday 15 September, at a seminar arranged in Helsinki on economic relations between Finland and Canada. The President believes that this is an opportune moment for the two countries to engage in closer economic cooperation.

“Rising arctic opportunities bring us closer today and even more in the future. Arctic technology, clean energy and mining – in all these fields there are always two countries, which stand out and which are top in different surveys and comparisons. Namely Canada and Finland”, the President said in his opening words.

President Niinistö also referred to the Comprehensive Economic and Trade Agreement (CETA) between the EU and Canada, which fosters business activities and commerce in goods and services. The seminar was organised by the Ministry for Foreign Affairs of Finland and the Embassy of Canada to Finland in Helsinki. 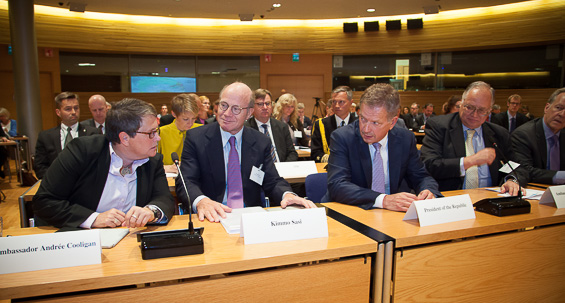 Canadian Ambassador to FInland Andrée Cooligan, Member of Parliament Kimmo Sasi, President Sauli Niinistö and Finnish Ambassador to Canada Charles Murto at the Finnish-Canadian Business Seminar in Helsinki on 15 September 2014. Copyright © Office of the President of the Republic of Finland