The conversation with President Poroshenko concerned the heightened tension in Eastern Ukraine, possible solutions to the crisis, and how the peace process could be taken further. They also talked about the UN Security Council’s emergency meeting about Ukraine and its results. President Niinistö emphasised Finland’s support to the Minsk peace process and Ukrainian sovereignty, congratulating Ukraine on successful parliamentary elections on 26 October.

With President Burkhalter, the Chairperson-in-Office of the OSCE, President Niinistö talked about the situation in Ukraine and the OSCE’s role in finding a peaceful solution. Finland is supporting Switzerland’s efforts in its role as holder of the Chairmanship of the OSCE. 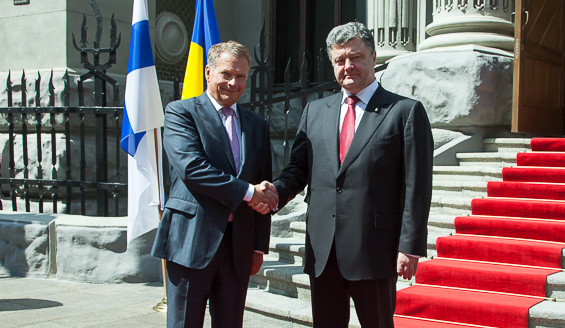 President Niinistö and President Poroshenko met in Kiev in August 2014. Copyright © Office of the President of the Republic of Finland