Home / Presidents in Poland: While Europe’s economy is in crisis, so is democracy

Joint press conference given by the Presidents in Cracow on 9 October. Copyright © Office of the President of the Republic of Finland

The Arraiolos Group, whose members are European Presidents, today concluded its two-day meeting in Cracow, Poland. The Group’s talks concerned the European financial crisis, the future of trans-Atlantic relations and the eastern dimension of the EU.

The Presidents agreed that in the European financial crisis the main thing is to restore trust. President of the Republic Sauli Niinistö pointed out that achieving economic growth will require determination not only from political decision-makers but also from ordinary citizens: “Politicians must be able to encourage and motivate people. Growth can only be achieved with the contribution of innovative people who respect work,” said President Niinistö.

Respecting European values was a topic that came up when discussing the eastern partnerships of the EU. The question of signing an Association Agreement with Ukraine is on the agenda at the EU summit next month. President Niinistö stresses that it must be ensured that Ukraine fulfils the terms and conditions set by the EU before the agreement can be signed: “While neighbourly relations are important to the EU, we must respect our own values enough to insist on compliance with them when negotiating on Association Agreements. Not to do so would send a very inappropriate message,” said Niinistö.

The situation in the Mediterranean Sea in general and the tragedy on Lampedusa island in particular were also discussed. Several Presidents asserted that the human cost to the refugees is too much and that a solution to the problem should be explored jointly. President Niinistö concurred with the call for a solution and added that instability in and around the Mediterranean is a great cause for concern for Europe.

In discussing trans-Atlantic relations, the main focus was on the European Union – United States Free Trade Agreement. Negotiations on this agreement have not been completed, but it was generally agreed that the negotiations should be continued. If enacted, the agreement would be highly beneficial for both parties.

The meeting of the Arraiolos Group was held at Wawel Castle in Cracow on 8–9 October 2013. The meeting was hosted by Bronisław Komorowski, President of Poland. The Presidents of Bulgaria, Italy, Latvia, Portugal, Germany and Estonia also attended.

At the meeting, President Niinistö had one-on-one discussions with Polish President Bronisław Komorowski, Italian President Giorgio Napolitano and Estonian President Toomas Hendrik Ilves. The discussion with the President of Poland focused on the Common Security and Defence Policy and cooperation around the Baltic Sea.

The Arraiolos Group is an informal convocation of Presidents of European countries that has been meeting since 2003 to discuss current European and global issues. The group takes its name from the town of Arraiolos in Portugal, which is where the first meeting was held. 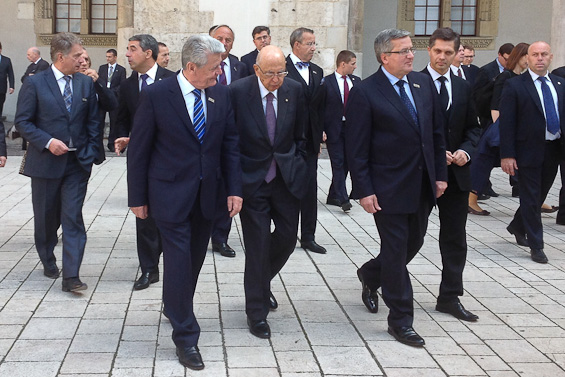