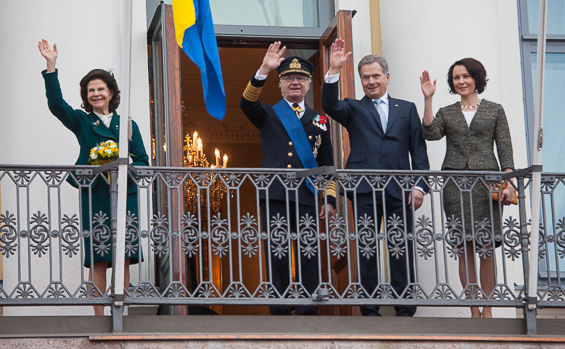 President Niinistö and his spouse made a state visit to Sweden in April 2012. Copyright © Office of the President of the Republic of Finland

Political, economic and cultural cooperation between Finland and Sweden will be the extensive focus of a royal state visit on 3–5 March. In addition, H.M. King Carl XVI Gustaf and H.M. Queen Silvia will meet young Finns in particular.

The state visit will begin with a reception ceremony in front of the Presidential Palace at 11 am on Tuesday 3 March, when President of the Republic Sauli Niinistö and his spouse Jenni Haukio will welcome their royal guests. The public will have the opportunity to follow the event from the Market Square (weather permitting).

After formal discussions, the presidential and royal couples will visit the Ateneum art museum, where they will see the Sibelius anniversary exhibition. The afternoon programme will include an enterprise seminar, a visit to Parliament and a wreath-laying ceremony at the Hietaniemi Cemetery. The day will end with a state dinner hosted by the President and his spouse at the Presidential Palace.

The second day of the state visit will begin with the royal couple and the accompanying delegation of Swedish business leaders meeting a selection of Finnish start up companies. The king and queen will also visit the Enterprise Village for schoolchildren in Espoo and a seminar involving opinion-shapers from young people’s organisations in Hanasaari.

Following a lunch arranged by the City of Helsinki, the king and President Niinistö will be briefed on the operations of the Defence Forces and on defence cooperation between Finland and Sweden in Santahamina. The heads of state will also be introduced to the training of recruits for the Guard Jaeger Regiment and to the medical evacuation capabilities of the Finnish helicopter unit forming part of the EU’s crisis response force. Sweden acts as the lead country for the response force. The programme also includes a tour of the Military Museum of Finland’s exhibition commemorating the 75th anniversary of the Winter War.

The state visit will end on Thursday 5 March at Lappeenranta, where the king and queen will visit Lappeenranta University of Technology and the Saimaa University of Applied Sciences. The City of Lappeenranta will arrange a lunch in the town hall and the Swedish embassy will organise a cultural event specially for young people at the Lappeenranta theatre. The programme will also include a visit to the local Orthodox church and the UPM biorefinery at Kaukas.

Sweden’s Minister for Foreign Affairs, Margot Wallström, its Minister of Education, Gustav Fridolin and a delegation of business leaders will attend the state visit.