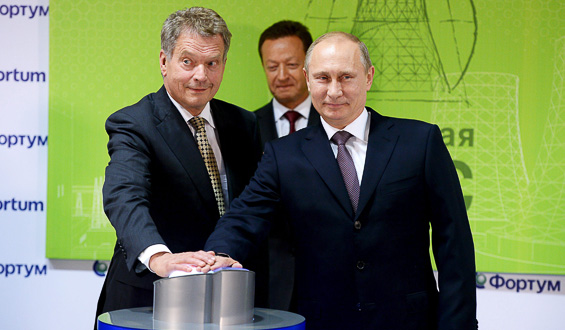 President of the Republic Sauli Niinistö met Russian President Vladimir Putin on Tuesday 24 September on a working visit to Nyagan in Khanty-Mansi. The Presidents’ talks focused particularly on the Syrian situation and on bilateral issues in trade and the economy. President Putin explained Russia’s position on the Syrian conflict.

“President Putin talked about how they feel about the Syrian issue. I mentioned the emergence of extremist elements, most recently in Nairobi, and more generally in the Middle East. There is a growing concern for what the international community could do in concert in this matter,” said President Niinistö at the press conference after the talks.

The talks also touched on bilateral issues between Finland and Russia, particularly economic and trade relationships. Russia is Finland’s largest trading partner and second largest export market after Sweden, and more than 600 Finnish enterprises operate in Russia. The talks included points such as prospective cooperation in shipbuilding and Russian WTO membership.

“Russian investments in Finland have increased remarkably. This is particularly gratifying, because I have always said that investments are needed in addition to trade. What is especially important is to create mechanisms that can help solve economic problems too. The Finnish-Russian Intergovernmental Commission for Economic Cooperation could step up its activities and review specific problem issues in our national economies,” said President Niinistö.

President Niinistö said that he had brought up the case of the Greenpeace activists at sea off Murmansk, and the two Presidents agreed that the matter would be investigated by the countries’ respective Ministries of Foreign Affairs.

Speaking of the potential of the Arctic region, President Niinistö noted that while we need to be able to use available natural resources, we need to do it in a sustainable way.

Attending the Presidents’ talks were the chairmen of the Finnish-Russian Intergovernmental Commission for Economic Cooperation, Finnish Minister for European Affairs and Foreign Trade Alexander Stubb and Russian Deputy Prime Minister Dmitri Kozak. After the talks, President Putin hosted a dinner whose guests included business people from both countries.

Before the bilateral talks, the Presidents jointly inaugurated the new Fortum power plant in Nyagan.

The Presidents were scheduled to fly to Salekhard in Yamalo-Nenets to attend the International Arctic Forum being held there. However, Salekhard airport was closed due to bad weather. President Niinistö will be staying in Ekaterinburg for the night and will travel to Salekhard on Wednesday morning, weather permitting.