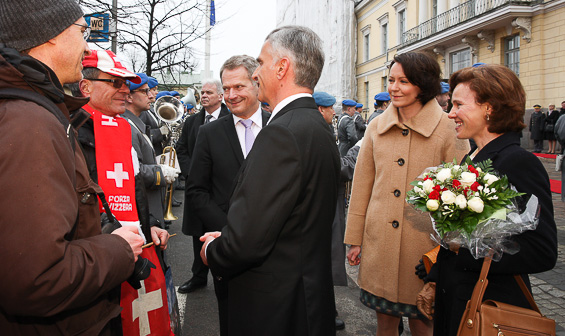 The Ukrainian crisis and enhancement of relations between Finland and Switzerland were on the agenda when President of the Republic Sauli Niinistö met Didier Burkhalter, President of the Swiss Confederation, during the latter’s state visit to Finland on Monday 7 April 2014.

President Niinistö notes that the situation in eastern Ukraine has reached a watershed. “The attention of Europe and of the whole world is focused there. It would be vitally important for the situation to calm down so that we can find out how to move forward,” said President Niinistö at the press conference after his talks with the Swiss President.

Switzerland currently holds the Chairmanship of the Organisation for Security and Cooperation in Europe (OSCE), and President Niinistö commended Switzerland for its active efforts to resolve the Ukrainian crisis. The OSCE has decided to send a monitoring mission to Ukraine, and Finland is taking part in this mission. The OSCE has also offered to host an international contact group to support the transition in Ukraine.

The two Presidents also discussed bilateral relations between our countries. There were two particular focus areas: development of economic cooperation based on competitiveness and innovation; and cooperation in peace mediation and security based on regular political consultation.

Relations between the EU and Switzerland and free mobility were also addressed in the talks.

President Burkhalter and his wife are in Finland on a state visit from 6 to 8 April 2014. This is the first ever Swiss state visit to Finland.

On Monday 7 April, the programme continues with lunch hosted by the City of Helsinki and a visit to Aalto University. President Burkhalter lays a wreath at Hietaniemi Cemetery, and the day concludes with dinner hosted by President Niinistö and his spouse Jenni Haukio at the House of the Estates.

On Tuesday, President Burkhalter will be meeting Prime Minister Jyrki Katainen and Foreign Minister Erkki Tuomioja and will visit Parliament, where he will be hosted by Deputy Speaker Pekka Ravi.

President Burkhalter’s spouse Friedrun Sabine Burkhalter will be introduced to Finland’s cultural heritage at the National Museum, Ainola and Halosenniemi in the course of the visit.

President Niinistö and his spouse made a state visit to Switzerland in October 2013.