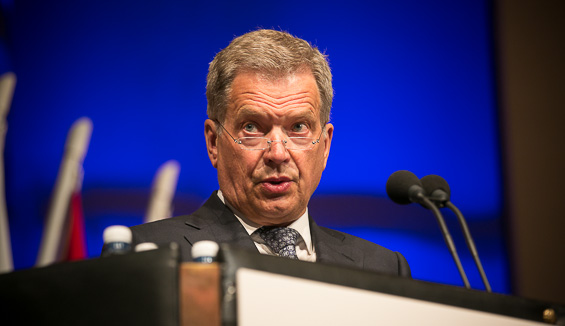 40 years ago Heads of State and Government gathered here in Helsinki to decide whether we could find more security in Europe, or would we still have to live in a world of continued tension and insecurity.

As a result of those discussions, an agreement was reached. The Helsinki Declaration was signed in an attempt to improve relations between the West and the Communist bloc. Although not legally binding, as it did not have a treaty status, the Helsinki Accords helped to build a bridge between opponents.

And while many deemed the accord to be flawed, as it seemed to consolidate the situation as it was, real political and moral commitments were made. Those commitments aimed at lessening tensions and opening further the lines of communications between peoples of East and West.

On that day, 30-years of mistrust and tensions were seen as enough. The process that started then helped to find common ground that eventually led to the end of Cold War. Peaceful change – once thought to be impossible in Europe – was made possible. In a sense, that meeting started a process of peaceful transition to a relatively long period of security and prosperity in our continent.

Today, the OSCE is back in the Finlandia Hall. And while todays distrust has not yet continued 30 years, not even three, tension has risen to an unwelcome level between the West and Russia. This situation has also, unfortunately, affected this meeting here and today. Maintaining the lines of communication and dialogue open is very important. Therefore it would be necessary for the EU to clarify the position of the OSCE Parliamentary Assembly in its sanctions legislation.

The question I find myself pondering is can we afford to spend next decade or even more wrapped in a cold battle, matching each time the opponent´s efforts to gain the upper hand in a spiraling conflict. Can we gain something if either party suffers, if lives are lost or if our economies already troubled in many countries have to face years of sanctions and countersanctions?

The answer to those questions is that we can´t. Neither Europe nor Russia – not to even mention the people of Ukraine – will gain from this situation and this troubled relation. We need to stop the situation from worsening. The most urgent task is to end violence in Ukraine.

As postulated in the Helsinki Accords, both Moscow and the capitals in the west agreed to refrain from the use of force, respect the sovereignty of countries and inviolability of borders. These points are as valid as they were 40 years ago. Or they are even more valid now, when these principles have been violated. They must be the basis for our actions today and tomorrow.

The Minsk peace plan is the only available roadmap towards the peaceful resolution of the conflict in Eastern Ukraine and Crimea. We should all support the plan, and even more important is that the plan is fully implemented. We need also Russia to carry its responsibility to secure peace and honor those decisions made here, in this very house in 1975.

If we do not act again to build mutual understanding, if we fail to learn from our mistakes, and if we fail to construct that bridge again, we might see more anniversaries of mistrust than I care to predict.

There are those who argue that the European security architecture has serious flaws and that the Helsinki principles are broken. But there are also those, including myself who conclude that it is particularly timely now to stand in support of the key principles governing European security.

These principles are guarded by the OSCE, which has done its part in the efforts to stop the violence in Ukraine, and I would like to commend the organization for its active involvement. In the OSCE field presence, men and women from the participating States, including Finland, are risking their lives in support of what they believe is right – the peaceful solution of the conflict and promoting security through co-operation.

The Helsinki principles have stood the test of time – the end of the Cold War, the Balkan wars, globalization and huge technological changes. Today we can live in an interconnected world where co-operation is even more important than what it was 40 years ago.

Now we have to decide whether we have the will and determination to cherish this heritage? I think we don´t even have a choice. There are no real other options.

We need to keep in mind that the OSCE area is not the whole world. Continuing turbulence in the Middle East and Northern Africa is also challenging European stability and security in a serious way. In addition to our problems, we have global issues and challenges, such as climate change, that we need to tackle.

One must remember that the weight given to European perspectives and ideas in this broad discussion is also dependent on how united and capable for co-operation our own OSCE region is. The days of a Euro-centric world are long gone but in a global scale the Euro-Atlantic community remains a major contributor. However, it cannot expect to be a very influential contributor if it cannot keep its own house in order.

The OSCE has served us well in the past and present. I hope it will continue to serve us well also in the future. I wish you every success in your demanding work. Thank you.