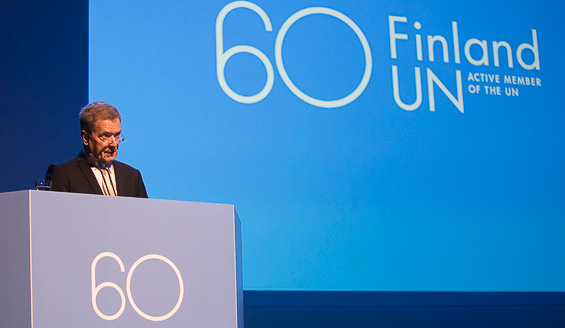 Let me begin by welcoming you, Secretary-General Ban Ki-Moon, to Helsinki. It is a great honor to have you here with us today. I am also glad to see all other distinguished participants in the Finlandia Hall today filled with such a variety of UN experience, interest and support.

We have gathered here to celebrate the 60th anniversary of Finland’s membership in the United Nations. At the same time, it is the 70th anniversary of the United Nations. The UN with its 193 member states is a unique organization with its universality, legitimacy and convening power. Its task continues to be as vital now as it was in 1945 when the UN Charter was agreed upon in San Francisco.

The Charter defined the three pillars of the UN system: peace and security, human rights, and development. All these three pillars remain more relevant than ever. We see it everywhere, also in Europe.

Even before our membership, we received help when we needed it. After the Second World War, Finnish children received 50 000 pairs of shoes from UNICEF which enabled them to go to school in winter. A few years later, Finland gave her first contribution to UNICEF to help children in other countries. Like your country, Mr. Secretary-General, we have been able to make the turn from an aid recipient country to a donor.

Throughout the years, Finland has been an active and convinced member of the UN. This was demonstrated by our first deployment to the UN peacekeeping operation in Suez already in 1956. We Finns have always been very proud of our blue helmets – a total of 50 000 men and women who have served in various operations around the world. This autumn, I reaffirmed our strong commitment in the Leaders’ Summit on Peacekeeping.

It is said that the UN Secretary-General is performing either as a “Secretary” or a “General”. In the history of the UN, we have observed both types. It is my belief that you, Mr. Secretary-General, belong to the category of the “Generals” and I shall explain why.

During your term as the UN secretary-General you have shown courage and persistence in drawing our attention to many difficult issues. Climate change, sustainable development and migration are examples of global challenges of which you have repeatedly reminded us of. In your actions, you have often sided with the weak and vulnerable. For instance, your consistent and principled support to the LGBT community showed moral courage and leadership.

Mr. Secretary-General, I would like to congratulate you on your remarkable work and strong commitment to empower women. I share your view that leadership and participation of women is crucial for global peace and security. I am proud to be a “HeForShe” Champion in your network of men leaders to promote gender equality.

The Paris Climate negotiations are turning to their final moments as we speak. We may be living the most decisive moments in our common fight against climate change. The conclusion in Paris of an ambitious, universal climate agreement is a test of our resolve to do this together. It has to be robust enough to give guidance towards a low carbon and resilient world.

We owe that to the current and, in particular, future generations. On this occasion, I would like to express my deepest appreciation to you, Mr. Secretary-General, for your personal commitment to our common cause.

Maintaining international peace and security is a challenging task for the UN. It requires support from the Permanent members of the Security Council as well as from the whole UN. This has been especially difficult in the context of the protracted Syrian conflict which has led to catastrophic humanitarian consequences.

However, for the first time in years we now have grounds for some expectations in Syria. The Vienna meeting in November was a positive event defining the process and timetable towards a transition in Syria. I welcome the Security Council showing responsibility and leadership in advancing the political process. We give our full support to the forthcoming inclusive negotiations between Syrian parties under UN auspices, and in due course to the UN-endorsed ceasefire monitoring mission. Finland has a long tradition in peacekeeping in the Middle East. Mr. Secretary-General, you can count on our support in enhancing peace and stability in the region.

Daesh / ISIL and its terror are a by-product of the conflict. The recent events in Paris, Beirut, Bagdad, Ankara and Sinai have shocked us all. Finland strongly condemns terrorism and violent extremism in all their forms and manifestations. Terrorism is a global and collective threat that requires collective action. In these efforts, we must ensure respect for human rights and the rule of law as the fundamental basis of the fight against terrorism.

It is easy to understand why people flee such terror and chaos. Partly due to this situation, Finland and other countries in Europe have faced a new era of migration. We must give all our support to target the root causes of the conflicts. New solutions must be sought to solve the present refugee situation. Finding true solutions will require a comprehensive approach consisting of peace mediation, peacekeeping, development and reconstruction efforts. This is a major challenge.

The UN has done a lot during the past decades. Finland has been an active part of that narrative during the past 60 years of our membership. We are proud for that. I will end by assuring you all that an active role in the United Nations is a central part of Finnish foreign and security policy. And will continue to be so.