Home / Speeches / Statement by President of the Republic of Finland Sauli Niinistö at the International Inaugural Summit “Grain from Ukraine” on 26.11.2022

Dear Mr President, ladies and gentlemen. Thank you for organizing this timely Summit.

Let me first convey message of solidarity from Finland to all Ukrainians. Russia is targeting Ukrainian cities, destroying infrastructure that is providing people energy, water and heating. We have followed with shock as Ukrainian cities have been plunged into cold and darkness. But we are inspired by the Ukrainians’ courage and determination to fight for their freedom and to repair what has been destroyed.

The international law sanctions deliberate targeting of civilians. During Russia’s illegal invasion, we have witnessed systematic violations of humanitarian law. It is important that those responsible will be held accountable.

Russia’s illegal invasion of Ukraine has a major impact on global food security. The rise in the price of grain caused by the invasion has seriously weakened food security for those most vulnerable. The Food and Agriculture Organisation and the World Food Programme have estimated that over 200 million people suffer from acute food insecurity in 53 countries. This is a global crisis. Russia has systematically destroyed Ukraine’s agricultural infrastructure and prevented the export of grain. We strongly condemn this. We also must actively combat disinformation disseminated by Russia, claiming that the food crisis is caused by the sanctions imposed by the West. The truth is that Russia alone is responsible for the human suffering caused by its actions.

The UN brokered the Black Sea Grain Initiative to resume Ukrainian grain exports. I also commend the crucial efforts of Türkiye in this regard. It is important to continue the shipping of grain, increase volumes and stabilise the market. The Solidarity Lanes created by the European Union facilitate grain and agricultural shipments from Ukraine.

I welcome Ukraine’s initiative to launch Grain from Ukraine Program. Mr President, thank you for your leadership and initiative.

Finland has made a contribution of approximately 7 million euros through World Food Program for grain shipment from Ukraine to Somalia. The Horn of Africa suffers from particularly severe drought. More than 20 million people are in need of food aid.

It is important to join our forces in this effort of global dimensions. Thank you. 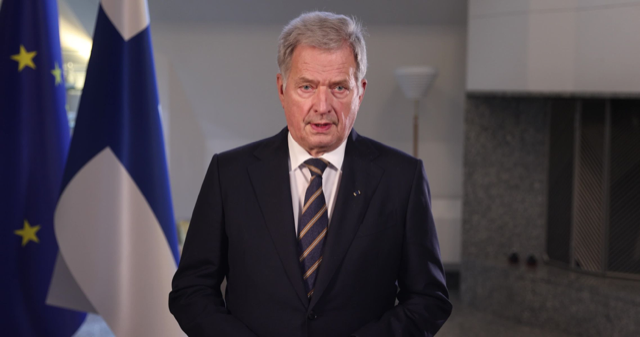