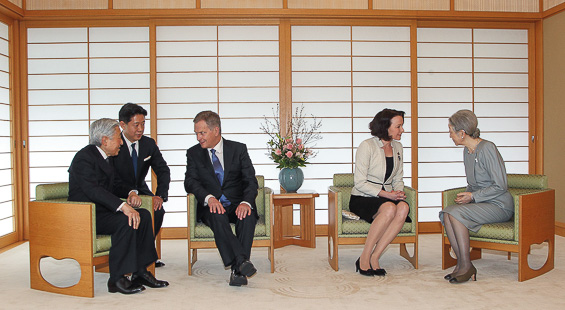 Emperor of Japan Akihito and Empress Michiko received President Sauli Niinistö and Mrs Jenni Haukio at the Imperial Palace. Copyright © Office of the President of the Republic

President of the Republic Saul Niinistö and Mrs Jenni Haukio made a state visit to Japan from 7 to 11 March 2016.

On Wednesday, 11 March, a seminar was arranged in the Japanese National Diet Building on economic relations between Finland and Japan and the strategic partnership between the countries. In his speech, President Niinistö emphasised the long-term, good relations between the countries, which extend to all areas of life from politics to the economy, the university sector, cultural cooperation and personal relationships.

The President recalled his time as Finance Minister during the Finnish recession of the 90s, when Japan granted a loan to Finland. “Finland was worthy of the trust you showed and paid back every yen. I am sure that these experiences have deepened the mutual trust and respect between our nations.”

Among possible areas of future cooperation, President Niinistö mentioned Arctic co-operation, as well as urbanisation, in which Japan is a global pioneer. “Smart cities, public transport, clean energy, water and waste management, and social services are areas in which Finland and Japan have special expertise.”

We also face common challenges such as the ageing of our populations. “Digitalisation is opening up new opportunities for our countries, such as digital hospitals and the latest innovations in social and health services, and we should be sure to exploit this potential,” said President Niinistö.

On Wednesday, President Niinistö met Tadamori Oshima, Speaker of the House of Representatives of Japan, and attended a lunch at the Japan Business Federation, Keidanren.

The programme also included a visit to the Japan National Press Club, where President Niinistö addressed local journalists on issues such as relations between Finland and Japan, the situation regarding asylum seekers in Europe, and equality. The reporters were also interested in Finnish security policy and Finland’s relations with Russia, as well as the integration of immigrants.

The programme began on Tuesday with a visit to Japan’s former capital, Kyoto, where the presidential couple familiarised themselves with the country’s history and culture. A traditional tea ceremony of the Urasenke school, as well as visits to the Kyoto Imperial Palace and Kinkaku-ji, otherwise known as the Temple of the Golden Pavilion, were included.

At the end of the day, the President met with representatives of the Prefecture and City of Kyoto, and attended a dinner hosted by the governor of Kyoto.

Minister of Agriculture and the Environment, Kimmo Tiilikainen, and a delegation of business leaders, including representatives of the forest industry, energy, ICT, infrastructure and Arctic expertise sectors are participating in the Tokyo section of the visit.