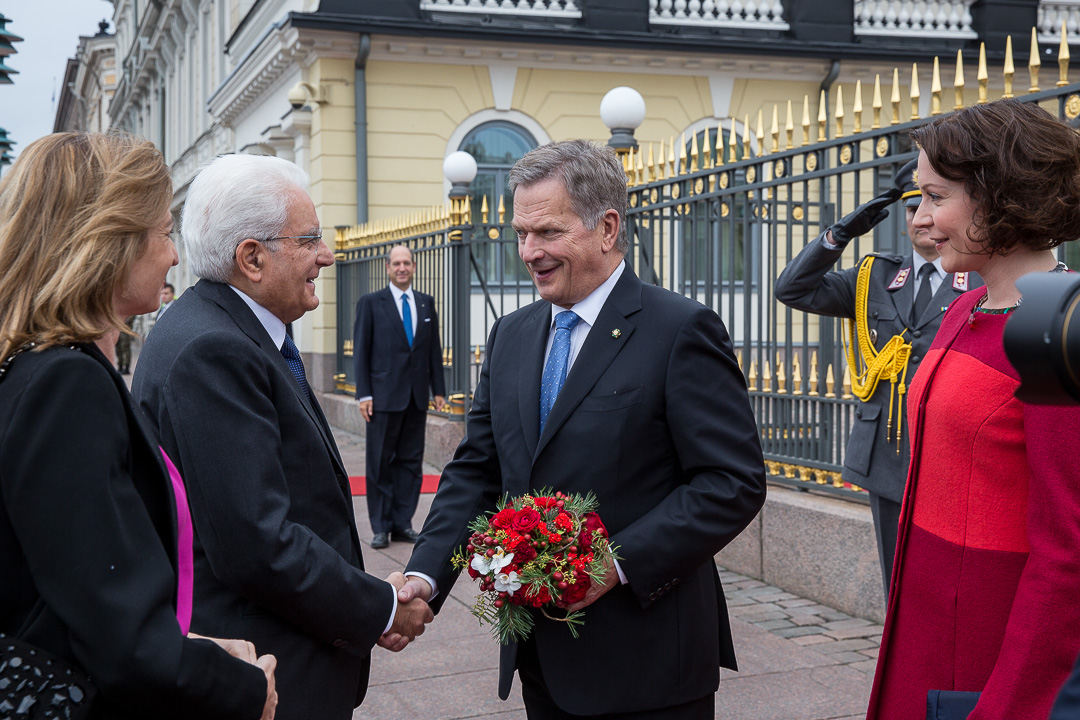 “It is a particular pleasure for me to make a state visit to Finland this year, when the country is celebrating its 100 years of independence,” President of Italy Sergio Mattarella said in the joint press conference he and President of the Republic Sauli Niinistö held in the Presidential Palace on 27 September 2017.

According to President Mattarella, the theme of Finland’s anniversary year ‘Together’ has always described the way Finns operate, and he pointed out that it would also be a good guiding principle for the European Union and the international community.

“Italy appreciates Finland’s message and hopes that people will listen to it internationally,” President Mattarella announced.

President Niinistö thanked Italy for all the work the country has been doing to control migration on behalf of the rest of Europe and underscored that Europe must work together on this issue.

“At the moment, Italy is the country under the hardest pressure through the Mediterranean route in particular, and Italy has been receiving massive amounts of refugees for several years,” President Niinistö pointed out.

“We agree on that we need to make efforts to improve the living conditions in the areas people are leaving from, so that they could stay in their home region. On the other hand, we must figure out together ways by which we could bring the uncontrollable migration under control,” President Niinistö continued. Both Presidents emphasised the importance of compliance with the commonly agreed rules.

“Migration cannot be eliminated, but Europe must be able to control it together,” President Mattarella said, and highlighted the refugee quotas assigned to the European Commission Member States.

“We thank Finland for having conscientiously complied with the agreement and having received the agreed number of refugees,” President Mattarella commented.

“In our discussions, we strongly highlighted the fact that the EU must secure the safety of its citizens. The fight against terrorism is one area where we must find more solutions specifically by means of increasingly close European and international collaboration,” President Niinistö pointed out.

President Mattarella also expressed his sympathies on the terrorist attack in Turku. For his part, President Niinistö sympathised with the Italian citizen who got injured in the attack.

The Presidents also discussed, among other things, the Finnish chairmanship of the Arctic Council, and President Niinistö’s proposals for reducing black coal emissions.

President Mattarella cited the address President Niinistö had made at the UN General Assembly, where Niinistö stated that if we lose the Arctic, we will lose the whole world.

“That is the way it is. After the Paris Agreement, we need to take even more steps in the same direction,” President Mattarella pronounced.

“I have been very pleased with the generous support given to our work in the Arctic Council,” President Niinistö said.

The day ended with a banquet

The President of Italy Sergio Mattarella is making a state visit in Finland with his daughter Laura Mattarella on 26–28 September 2017. On 27 September, the day ended with a banquet held by President Niinistö and Mrs. Jenni Haukio at the Presidential Palace.

President Mattarella’s itinerary also included a wreath-laying ceremony at Hietaniemi Cemetery. Furthermore, he had meetings with the Speaker of the Parliament Maria Lohela and the leadership of the City of Helsinki. On Thursday 28 September, President Mattarella will still have a meeting with Prime Minister Juha Sipilä.

The President of the Republic Sauli Niinistö made a working visit to Italy in November 2014, when he met President Giorgio Napolitano. The previous state visit from Italy to Finland was made in 2008, when President Napolitano met President Tarja Halonen.