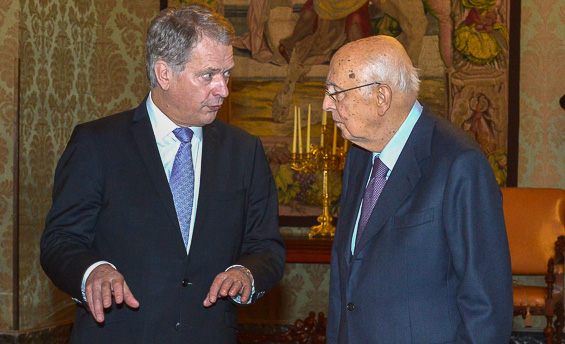 Photo: Antonio Di Gennaro / Office of the President of Italy

President of the Republic Sauli Niinistö met with his Italian peer, Giorgio Napolitano, during a working visit in Rome on 5 November 2014. Primary topics of discussion included the Ukraine crisis and relations between the EU and Russia. The presidents also discussed the future of Europe from the economic perspective, and in relation to security. Other international topics included immigration and border security in the Mediterranean and the situation in North Africa, in particular the response to the security threat presented to Libya.

President Niinistö stated that the Ukraine crisis has had a fundamental impact on relations between the EU and Russia. The President said that it was vital to halt the negative spiral in relations between the west and Russia, while taking a firm stand on violations of Ukraine’s sovereignty by Russia. In addition, the presidents discussed the parliamentary election held in Ukraine on 26 October and the unlawful local election organised by separatists on 2 November.

With regard to the flood of immigrants crossing the Mediterranean, President Niinistö commented that the pressure of immigration is not a concern and problem of Italy alone. Finland is therefore providing assistance through Frontex and the EU, in order to bring immigration under control.

The meeting took place at the Quirinal Palace in central Rome. The discussions after the bilateral meeting involved a broader set of participants, including Paolo Gentiloni, the recently appointed Italian Foreign Affairs Minister.