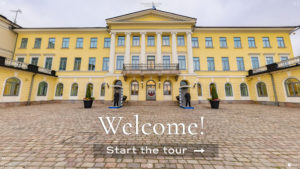 The Open House event at the Presidential Palace is now virtual. On the tour, created with panoramic images, it possible to visit the halls and rooms of the Palace and view its art works, furniture and history. You can start the tour at the address presidentti.fi/en/presidentialpalace360/.

The Open House event cannot be held at the Presidential Palace due to the coronavirus pandemic. The most recent Open House took place at the Palace in September 2019, during the celebrations for the 100th anniversary of Finland’s republican form of government.

In addition to its imperial art collection, the Presidential Palace displays a number of works owned by the Ateneum Art Museum. The imperial art collection includes works by, among others, Albert Edelfelt, Werner Holmberg, Ferdinand von Wright, Hjalmar Munsterhjelm and Akseli Gallen-Kallela. The collection also has bronze busts of all past Presidents of the Republic of Finland and portraits of their spouses.

The tour is conducted in Finnish, Swedish and English.

The history of the Presidential Palace dates back 200 years. Drawings for the building, which was originally completed in 1820 as a merchant’s manor and designed by Pehr Granstedt, were finalised by Carl Ludvig Engel. The building was purchased in 1837 as an Imperial Palace, and in the early 20th century it received an extension with large halls. After Finland gained its independence and the republican form of government became established, the building was assigned to the use of the President of the Republic in August 1919, when the first President of the Republic, K.J. Ståhlberg, moved into the building with his family.

Virtual tour of the Presidential Palace