Home / President Niinistö at the UN: The core values of the UN have been violated 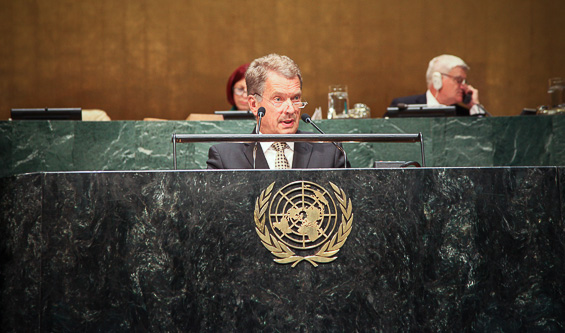 According to President of the Republic Sauli Niinistö the crisis in Ukraine has a deep impact on the security of Europe and concerns all of us. “The core values and rules the United Nations is based on, have been violated”, President Niinistö said at the UN General Assembly on 24 September. “We have not experienced such breakdown since the tragedy of the Balkan wars.”

President Niinistö stressed that Ukraine is not only a question limited to Europe. “A rule-based international system is a precondition for peace and security, for human rights and development. If we cease to protect this system, it will cease to protect us. It would be a dramatic and far-reaching mistake to let our rule-based order slip towards chaos and the law of the jungle.”

We need to reform the Security Council

According to President Niinistö, the UN Security Council has not, unfortunately, been able to uphold its responsibilities neither in Ukraine nor in Syria. “We need to reform the Security Council. Finland supports the efforts to restrict the use of veto.”

The President said he was pleased that the General Assembly adopted the resolution on “Territorial integrity of Ukraine” in March with a clear majority. “Yet the voice of this important body should have been even stronger, condemning Russia’s actions and charting a way towards ending violence and restoring peace.”

“De-escalation in Ukraine cannot happen without Russia’s active steps. Russia should control its border and prevent the flow of arms and fighters, and thereby contribute to stabilization of the situation in Eastern Ukraine.  There can be only a political solution to the crisis.”

Syria must not be abandoned

“The war in Syria has severely affected the security situation in the whole region: the geographical expansion of the ISIL organization, with its horrendous terror, is a by-product of the conflict. This situation has serious consequences locally, regionally and internationally. This challenge must be tackled together through a wide-ranging international co-operation. Finland will contribute to these common efforts.” the President said.

According to President Niinistö, the Syrian conflict can only be solved by political means. The international community must not abandon the people of Syria. “Finland continues to give its full support to the UN’s Special Envoy for Syria. Women in Syria, as in other conflict-driven countries, must be included in the peace process. We welcome women’s active efforts to strengthen their voices in Syria and everywhere.”

President Niinistö also spoke about the intergovernmental negotiations on the post-2015 agenda. “We should aspire to a new kind of global commitment to fulfill both the needs of the mankind and the planet earth. We owe this to our children and to their children.”

“We can’t rely only on traditional resources any more. Public funding for development still is important for the poorest and those affected by conflicts. But at the same time, domestic resource mobilization, innovation, trade and technology and investments must play a stronger role in sustainable development.”

“A just tax and redistribution policy is one of the most efficient ways to reduce inequalities and fight marginalization. Rule of law and fight against corruption play a huge role as well.”

In the end of his speech, the President called to redouble our diplomatic efforts. “We must act with determination and we must act now. Finland will support efforts to restore peace and prevent further damage to our rule-based international system. We must also aim high – in addressing together the broader global challenges of climate change and sustainable development.”